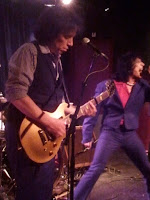 For some good old rock and roll, rhythm and blues with a shot of soul and gospel, The Imperial Crowns is your band. Led by the enigmatic Jimmie Wood the band trunches on every rock and roll cliché in the book. Chews it up, spits it out and comes up with its own surefire blend. So recognisable yet so good and so much fun.

It's been years since the band played in Leiden. 12, I was told. Chances are I was there. Man, was my life different then, but that may be the case for most people. It's such a long time.

The band got back together as things go with some bands. Whether because the drummer gave everyone a call or because someone told Jimmy and guitarist JJ, that their band meant so much to him or her, is unclear. Both stories were told in one go. Fact is they were back at the Q-Bus and tried to lift the roof and all but succeeded. 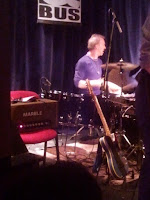 You have to deserve it to wear rock and roll shoes and if there is such a band, it is The Imperial Crowns. From the very first notes the band started a steam train rolling that did not stop before it crashed head on at the end of the line. There's just no holding back. A lot of preaching is going on, but all about the temple of love if not pure lust. Jimmie Wood swerves like a dervish in front of the audience, as if James Brown in his earliest fame. Backed by the, by comparison stoic, JJ Holiday on guitar, the man called Billy Sullivan who keeps the pulse and the beat of the band going and youngster Daniel Aguila on bass. (It's a good guess what kind of music he grew up on playing. My guess is math metal or something, as he obviously can play anything.) The groove they lay down provides the background for everything Wood wants to do. Sing, blow the harmonica, dance or talk his talk. Even a little rhythm guitar. It allows him total freedom to mesmerise people and get them all into that The Imperial Crowns groove.

Strangely enough that groove brought back a memory of a movie I saw on tv in the late 80s. Was it called 'The Big Beat'? I can't recall. All original U.S. Rhythm and Blues artists and then The Rolling Stones, the reason I watched the film to start with. James Brown played before The Stones. 'Please. Please, Please' act and all. It's 1964 and The Stones still had so much to learn. It was almost pathetic watching Brown and then the copying white-nosed lads from London. To come back to that groove. That is what The Imperial Crowns have down so well. Add the show and things just can't go wrong. 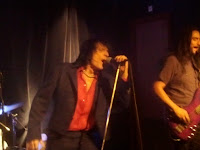 It seems we had a first ever. Before the encore Jimmie Wood noticed that he forgot to put on his belt. Well, did you evah? Of course it contained the finest rhinestones when he came back on. One could also admire the fact that he can still wear pants without the need for a belt. It's just how things are perceived.

Yes, it was 12 long years living without this groove. But as the person said, you guys do not realise what you mean to me. That made the band realise what the band and its audience means to them. The Imperial Crowns, I'm afraid will never get rich from their music. I do hope that it makes them come by comfortably enough to enjoy what they do for a long time coming. The world needs bands like The Imperial Crowns. Just to make it feel better every once and again.

You can listen to 'The Calling' here: