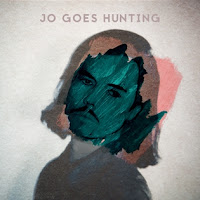 January 2016 Jo Goes Hunting played a support gig for De Staat in Leiden. I was late, flat tire, so did not see the whole show. I remember being impressed by the final song of the band, that had a singing drummer sitting completely up front. I bought the EP, but my feelings were mixed, as I wrote on this blog. Come winter 2017 and Jo Goes Hunting is back with a full length cd. Let's assess how the band fares.

Well, band? Jo Goes Hunting is the project of Jimmi Jo Hueting, the younger brother of Rocco Hueting of De Staat. Now I understand why he was pleasantly surprised that I had bought 'Glow' at the De Staat show. I now know that the support act had something to do with patronage, but when you can help out, why not?

Come, Future is some steps away from the elementary EP released in 2015. In fact I'm pleasantly surprised by the steps made on this album. Surprised like a was with the last song Jo Goes Hunting played that day in Leiden. A song that was so much more layered and structured than the two songs I heard before it.

Let's say as multi-layered as the opening song of Come, Future, 'The Winner', is. The kind of song that shows that this artist isn't happy with a single solution. The rather unfriendly beginning morphs into a dreamy sequence. Changing everything, opening up the album in a great way, enticing the listener to start doing just that: listen with interest.

What unfolds is a trip through modern music in which rock, electronics, psychedelia and pop all come together in a mix that can jump off in all sort of directions. The stark, strict rhythm of 'The Winner' makes room for the bare sounding 'I Don't Mind', after which the more up paced 'Confusion' sets in, with, once again, dreamy interludes. Jo Goes Hunting avoided being caught in one corner. Instead the music is present in all corners and how many options can be found there, depends simply on the form of choice.

For people enjoying their songs and albums straightforward Come, Future will be extremely irritating. For me personally it depends on the quality of the songs. It is that simple. A second factor could be when a song is simply too far fetched to fit into the whole. Sometimes that happens on this album. Jo Goes Hunting mostly stays on my good side. So I'm not convinced for 100% by Come, Future. What I'm hearing is a band that is experimenting. A band that firmly made a choice to branch out and not present a uniform view of itself on its first album, like most bands opt for. In other words, there's no telling where it will go to after this album. That Jo Goes Hunting holds a promise is clear.

As comparisons I can state that on Come, Future there are experiments in rock that were common with Belgian bands in the 90s. On the other hand I hear something of The Beach Boys from albums like 'Surf's Up' hidden beneath the modern sounds. De Staat is there in a lighter, less heavy rhythm driven way. Above all Jo Goes Hunting has tried to come up with a unique sound. In doing that, it sets itself apart from mainstream ears and succeeded in doing so. True, it is harder for me to keep my attention spanned for the duration of the album, showing that the band has another stretch to go, perhaps also needs a few more options to colour in its future music. For now, enjoy what we have though. No one knows what the future brings, so for now Come, Future is enough.

You can listen to 'Winner' here: