Veggie Patch In The Desert. Elenne May 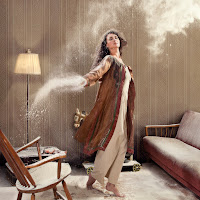 And finally here's instalment number three. I started this trip in January with the first EP that was released in November of 2015, 'Sheep For Fibre', followed by the second EP, 'Stairs Raise Children' (and a live show in Utrecht) this May. All songs are to be combined into Elenne May's second album with the same name as this EP. This blog followed the sequence of the EPs, so why stop now?

Again Veggie Patch In The Desert does not let itself be caught in the first listen session. It grows on me, like plants grow slowly but surely, to finally bloom and show their beauty. All mood, all atmosphere, so musical, yet so apart from what is common in music in 2016. Elenne May does not please instantly, but certainly in the most satisfying way. As an experience worth reliving. Again and again.

Like the angels' dust on the cover, the music is sprinkled over the listener. Slowly but surely I let myself be enraptured by the music of Elenne May. Mystical, mysterious, as if Enya in a rock setting, because of the dark guitar sounds of Roeland Scherff and the soft drums and bass behind it. Elenne Klok is less prominent as a keyboard player than on the previous EP. This is the guitar side of Elenne May.

It all starts with 'Prayer Booth'. A dark song that unfolds slowly. There's so much inner tension within the song that it's almost bursting at the seams. There's a Kate Bush meets choir music by Agnes Obel meets The xx guitar element to the song.

At the same time Grace Slick at her best in Jefferson Airplane can be heard over the first three songs as well. All have that 'Rejoyce' magical element. The songs have a lightness that belies the mood. This is an evening record at a minimum. Late night is even better suited probably. No one left to run around in the streets. 'The White Dove' begins soft and tranquil but somewhere halfway the mood changes and becomes a bit harsher. The guitar has what I'd call the signature sound for this EP. Some sort of vibrato effect is put on the solo notes, giving it an ominous sound that adds to the tension that is not released.

'Vegetated Kindness' creates its own universe. Again a soft song with a few synth sounds moving in and out of the song. The rhythm is introduced by the bass of Eveline Ypma. She softly cradles the song with the repeated soft riff over which all enfolds. Again the song changes mood when Elenne May sings '"Dominate Me', quite a change from the previous EP where textually the opposite was sung.

Veggie Patch In The Desert ends with the lightest and most joyful song of the EP: 'I Have The Key'. It unwinds towards the moment we are, abruptly, sent on our way: "And of you go". Back to life and reality, with a head full of magical songs. Songs that are not easy to sing along to, songs that are hard to grasp and remember, but also songs that are with like a warm coat. Missed as soon as it's not there when I need it.

No matter what I compare Elenne May to, it is totally its own. The band has a unique sound that is getting more to the point by the record. Fairy tales and angels' dust might have been a title to for one of the EPs. To call the band unique is perhaps slightly far-fetched, the term comes close though. This band builds its own mood and atmosphere and presents itself very self-assured. Time for a first breakthrough of some sorts. A minute with Matthijs would be a good start.

The trip started in January this year is over. It is all here now and turned into a cd and LP with 16 songs. How will it all sound in one go? I'm about to find out.

You can listen to and buy Elenne May's songs here: