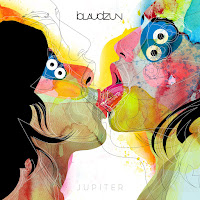 After an interesting cd, 'Seadrift Soundmachine', Blaudzun truly came into its own with 'Heavy Flowers', a sound that was perfected with 'Promises Of No Man's Land'. With a fantastic performance on tour with the second mentioned cd and a good one, but no longer surprising, with the latter. All reported on on this blog of course.

Over the past year I noticed that I was not eagerly waiting for a new Blaudzun cd. It seemed like I had heard enough and feared a cd much in the same vein as the last ones. His album under the name Haty Haty, which I did not like enough to write on, already signified a potential change. So where am I with Jupiter, Part 1?

There is one thing that Johannes Sigmund can not change: his voice. What he can change is all that surrounds it. In arranging, in compositions, in (the number of) instruments used, in the mix. And that he has. Jupiter, Part 1 in general is much more down to earth and less bombastic. This led me to be pleasantly surprised by the album from the very first moment onwards. Although the first single, 'Between A Kiss And A Sorry Goodbye', scared me a bit when it premièred live at Giel Beelen on NPO3. The strained voice and ooh oohs? I didn't know at the time. The tickets for the live show were booked anyway to make sure.

Take the opening song, 'Everything Stops'. During the song this dark, tight sounding rhythm guitar presents itself, which in the end is the lead instrument for Jupiter, Part 1. It drives all the songs forward. This approach makes this new album by Blaudzun very direct, which is a distinct change from what went before. The dark saxophone adds to the mood in the song. Bass and drums finish what is happening here. Over it Sigmund sings on the top end of his voice, somewhat forced, but certainly not unpleasant. A piano and organ do the rest with small embellishments colouring the song in.

Things are alright between the single and me by the way. It is the link between the Blaudzun of 2014 and the one of 2016. Also barer, but it has that sound that is unmistakeable. Although the name of Canada's finest Arcade Fire is dropped many a time, as far as I'm concerned there's no comparison. Blaudzun wins easily. His songs speak to me, where Arcade Fire at best impresses me but often simply bores me from 'Neon Bible' onwards. The fact that Blaudzun escaped that trap to start boring me, adds to my favourable opinion of Jupiter, Part 1.

The directness scores highest perhaps with the title song, 'Jupiter'. Again the basis is a band with a baritone sax to add a few notes here and there. The song just goes and goes and goes, begs dancing I'd say.

In 2016 Blaudzun is a band and not a collective of many different instruments that all add to the sound. It was the right move to make, as it was my conviction we could only have gotten more of the same or over the top bombast. Now we have an elementary album with a few pop and a few rock songs. 'Out Of Mind (Hand It Over)' is the ballad. Light strings accompany the song, before the sax joins and carriers the mood change single handedly.

Blaudzun in the bio accompanying the album, says that he dislikes the concept of releasing an album, tour for two years and only then start thinking about new songs. Having to wait two or three years?My opinion is that it kills creativity. Young bands ought to release singles and albums in a year. Only that way can young artists hone their songwriting skills. 'Jupiter, Part 2 is announced for spring 2017. Part 3 to follow after that. And it still has to be made.

And the cd cover? Hideous, yet so fascinating. All the acrylic paint blurring in and out of each other. Yes, art it is, sort of like the music. We have a match here.

Blaudzun has made his most direct album, his "most sexy" he calls it himself. I don't know about that, but for now this record will spin a while in my player. More on Blaudzun in December. How will it sound live and what transformation will the old songs undergo with a six piece band? Stay tuned folks.

You can listen to 'Jupiter' here: