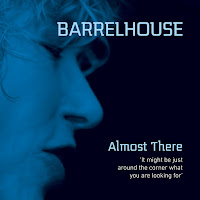 Barrelhouse, a name that I know for about as long as the band exists. It's just that I never got around to listen to its music. Blues sort of went in and out of my line of interest in the mid 90s. Before that I only liked the Muddy Waters with Johnny Winter albums. So now, after 40 years of Barrelhouse, Almost There "lies" in my MP3 driven player.

What surprised me foremost and this has nothing to do with the music, that this isn't a comeback album. No, the band played, recorded and toured for 40 years now. What surprised me secondly, is what a fine album Almost There is. Barrelhouse is a band that lays down a great groove, whether the song is fast or slow. 'Almost There', the title track is a fine, fine slow blues. The voice of Tineke Schoemaker is smoke, drink and life inhibited and fits the blues like a glove.

Barrelhouse has a clean sound when all is said and done. At the same time it is as dirty as the bar's floor after all the barrels've been emptied and all the chips and peanuts have been eaten. And that is my third surprise listening to Almost There. At first listening it is all a drawing neatly between the lines kind of blues, while I later felt like the pencil never found the paper. This aural illusion is so well done. The clean playing, gritty sound of guitarists Johnny and Guus LaPorte is a part of this trick. The neat and clear singing, with a gravely voice of Tineke Schoemaker is the other. Add the piano of Han van Dam that moves in out of the songs and the playful element of Barrelhouse comes forward. The dutiful, hard work on bass by Jan Willem Sligting and the drums by Bob Dros, allow the rest to excel and they do.

In 'Don't Hold Your Breath' there's a complete guitar battle going on. Both La Porte's are playing a solo, while never getting into the other's way. They are not competing, but both aiding the other to finish successfully. Every note is meant to be in its place there and then. This big, flashy song is contrasted by the piano and voice in 'Goodbye'. Van Dam plays his honky tonk piano style light, nudging Schoemaker on with his left hand, while gracing her with his right.

A little southern rock, Allman Brothers' style, is to be found on Almost There as well. 'Hoky Poky', is no 'Hocus Pocus', but does bring 'Jessica' to mind. One of the pricesongs of this album for me is the soulful 'Walk This Road'. The band strides away a little from the blues and rock path and comes up with a beautiful song that again shows how diverse this album is. Honky tonk rock and roll is up next and again so much fun. Barrelhouse is chasing Herman Brood's best few songs with 'Down In The Alley'. And there is so much more for you to discover.

A band that is around for 40 years, in the original line-up, brings with it that the members are getting on in life. Let's hope that the title of the album is not prophetic. Hearing what I hear it seems like Barrelhouse still has many a good year in it. Almost There is as relevant in 2016 as it is urgent.

You can listen to 'Lonely Together' here: