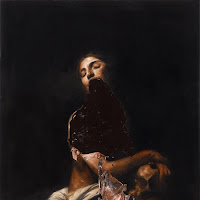 Axolotl? What's that again? A vulcano in Mexico, an animal, a tribe, a Mexican restaurant? I just can't remember, but know I've seen the word before. It turns out to be a sort of salamander, with a rather peculiar shape.

O.k., to call the first song of an album after such a strange and exotic being, does that say anything about the album? We'll come to that later.

First let's go back to my relationship with The Veils. I kind of liked the first album, but it never stuck and nothing that followed really did. So when I read that The Veils teamed up with a producer/musician of a modern electronic inclination I was pretty much sure that I did not have to listen to Total Depravity. Somehow I did any way and not just once.

I found that The Veils seemed to have a move that gives its music an edge that it lacked in my ears up till now. Don't ask me to describe the difference in detail. What I can do is describe what my ears are hearing: an amount of tension in the music that makes it extremely interesting to listen to. It all starts with the production. As if the music comes to me from under a layer of dust or as if played extremely loud in the basement and leaking through the concrete floor, the windowsills and cracks in walls and doors. The sound is dirty, tainted, haunted. Moving through the album this feeling leaves me later.

With the word haunted a band springs to mind, 16 Horsepower (or Wovenhand these days). 'King Of Chrome' is just that 100%, 'Here Come The Dead' has it in feeling and expression. Not all of the album is this intense, but that devil on my tail feeling is never far away. Finn Andrews has a tormented edge in his voice, the feeling that everything is lost, no matter what. That predestined feeling Calvinists carry with them.

The music is part organic and part experimental, electronic. Some songs are melodically free flowing and softer. A song like 'Here Come The Dead' is harsh with a soft electronic undergrowth and spooky extremities in the loud eruptions. A song that might have started with an acoustic guitar, but all was stripped away and rebuilt in the studio.

At the same time, somewhere deep below in the music is the same musical quality Van Morrison has. A song like 'In The Blood' reminds me of Van the Man instantly, no matter what else may be going on. Just ignore the rest to hear it.

Astonishingly there is simple, pure beauty on Total Depravity to. The melancholy, sad song 'Iodine & Iron' is carried by a soft lap steel guitar and pure piano notes. The kind of song a jazz orchestra could play in a nightclub during late hours, a cigarette's smoke curling upwards in the spot's light. Think a slightly different arrangement and you're just there. The kind of song that can envelop and caress, comfort the listener who needs it.

When a Leonard Cohen like harmony chorus comes by in 'Do Your Bones Glow At Night?' the album takes another twist. From the distorted vocals of Finn Andrews, that sound again like David Eugene Edwards, to the soft sway of the ladies is a huge step. "To forever dance me" even lyrically hints at the old master. A beautiful song which holds the inner contrast of Total Depravity within it as well.

Taking the whole album in, it is this, the contrast between the different songs, that make most songs stand out. The Veils takes on songs from different musical points of view and presents it in an extremely attractive manner. Whether sad, as in 'House Of Spirits', a modern 'House For Sale' theme like song, or haunted, the band convinces, where previously it did not convince me.

To end the question is whether this album holds total depravity within it? Well, despite the nudge to Nick Cave in the title song, it does not. And neither does the exoticness of the Axolotl. They seem just nice titles. The Veils steps into many paths, musically. The strength of Total Depravity is that the band remains consistent despite its sidetracking here and there. This is a good album nudging towards the great.

You can listen to 'Total Depravity' here: