It Just Is. The Bevis Frond 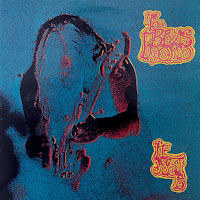 The Bevis Frond? Never heard of it and never would have if not two things happened fairly soon after each other. One is that 'Oor' mentioned that several cds were to be re-released and that PEC Zwolle coach Ron Jans could start taking out his wallet, being a real fan. Second is that I got acquainted to Fire Records and thus to the music of The Bevis Frond. No more asking 'where's Butthead' from now on I assure you.

I had no idea what to expect from The Bevis Frond. The fact that albums are re-released indicated that it must have been around for some time or was around? Wikipedia helps of course. A band that released its first album in 1987 and the last one to date in 2015. And not just a few albums, and they all passed me by.

I decided to pick one of the re-released albums at random and see what I think about. It Just Is sounded like a fine title for an album that I wanted to get acquainted with. To my surprise the first song totally blew me of my feet. 'I Can't Stop Lying' is a fantastic alternative rock song. Where were my ears in 1993? Discovering fantastic new music actually. 1993 is the year that I reconnected with music beyond my 60s and 70s faves and finding new ones. Somehow The Bevis Frond were not reviewed or in a way that just didn't speak to me. Perhaps I wasn't ready for a band that preceded bands like Fountains of Wayne and Weezer with a few years. Because that is what The Bevis Frond is doing here. Playing like the bands I got to like just a few years later. Melody, rocking out, and fantastic guitars and pounding drums.

In the same Wikipedia lemma it says that frontman Neil Saloman was already playing in a band in the late 60s. That would make the man in his 60s. That is possible of course. The band is basically Saloman, with a touring band to go out into the world.

His love for the 60s and hints at psychedelia are found on It Just Is abundantly. In 'Idiot Dance', a bit of a jam kind of  song, we are flying in the best of 60s traditions. Traffic, Pink Floyd, don't be surprised if you recognise a bit of it. It is a bit of an exception though. Mod punk has made an impression on Saloman also. The Jam and its aggressive way of singing is present all over the album. To this he brings some fantastic guitar playing. This instrument is all over the record in a very positive way. Flashy, in your face, all sorts of effects. You name it, you've got it.

In this shaken and stirred mix of rock influences The Bevis Frond goes all out and beyond. A song can go beyond the boundaries of neatness. 'What It's All About' is so full of whining guitars, pounding drums, a mouth harp, weird noises and Neil Saloman who doesn't hold back as well. Too much of a good thing? It's getting close. A bit of Ritalin might have worked a miracle here.

As I already wrote, the guitar work on It Just Is at times is fantastic. Jimi Hendrix at his rockiest, backed by an alternative rockband of the 90s can be heard here. Lenny Kravitz with no restraints. Jimmy Page on steroids. All with a backing of drums and bass that was unimaginable in the 60s and 70s classic rock. John Bonham comes close though.

The Bevis Frond has two faces for sure. The 60s psych outing 'Terrible Day' is so far detached from 'Let Me Live' that precedes it. Detached it may be, it is a beautiful, fantastic song. Melodically it works a miracle. The keyboards, the harmonies, the singing. Everything from The Kinks and The Who to all these lesser known U.K. bands of the time. The Bevis Frond absorbs it all all and comes up with its own version.

The album is 18 songs long, which is a bit much, I'll admit. On the other hand there is so much beauty and great songs amongst the 18 songs that the overkill is something to cherish. Where I started to have a near physical reaction with the overdone music of another, more resent, U.K. band not so long ago, that I can't for the life of me remember the name of, the same trick is done so brilliantly and diversely by The Bevis Frond that there simply is no comparison. What an album and what a musical world left to discover.

You can listen to and buy It Just Is here: