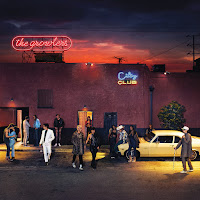 It's like a whole wave of musical memories washes over me listening to City Club. The Growlers is a band that loves working with existing ideas, works them around and presents them as something new. That is basically the idea I get from listening to its album. Is that a bad thing? Not necessarily. If the quality is there, it's just fine.

City Club has come by on my player regularly, so the quality part is certainly o.k. What is behind The Growlers? I had not a clue, so I decided to open the bio. The name The Strokes and more specifically its singer Julian Casablancas had popped up in my mind while listening to the music on offer more than once. City Club is released on his label, Cult Records and was co-produced by the man. That explains a lot I have to say. Singer Brooks Nielsen certainly recorded his vocals in a similar vein.

The Growlers are from Los Angeles and is, now, a three piece band. Around since 2006 it has released five records since 2009. For an album that started out as loops over loops it has an extremely melodic side. The Growlers have found the melodies in or around the loops.

In the first track the approach mentioned is easy to discern. Until the break it is a uniform kind of song that starts and repeats each and every time. Matt Taylor is responsible most for the loops. Singer Brooks Nielsen recorded his vocals over them. In the title song that opens the album, it's like a part of the 80s marches through my speakers. A guitar like Duran Duran's 'Girls On Film', a beat like same song. The voice is just so much different. The exuberance of Duran Duran's first hitsingle is certainly missing. That is where the influence of Julian Casablancas shows itself. It is not as if this is New Romantics disco. For that everything is too dark and subdued.

'I'll Be Around' is a more funky track. Not a happy track, but certainly danceable. The rhythm is at the bottom of things here. A relaxed version of The Stone Roses or Primal Scream. Madchester is not far around the corner with The Growlers. Half of the rhythm parts are stripped away here and its not organic percussion I'm hearing. The slurry singing certainly is.

Luckily for the mood of the album, The Growlers can take a softer turn. 'Night Ride' has a much more relaxed and lighter sound. Here it is Brooks Nielsen's treated voice that keeps the mood down. By then it is clear that in each song an interesting lead melody can be found. Talking about expertise, then this needs mentioning.

As the album progresses The Stokes' influence becomes larger and larger, without the few absolute top songs that band has a patent on. Towards the end of the album it even becomes a bit irritating, I can't help but noticing that my attention wanders off. The uniformity of the way the album is compiled does become a problem to sit out the whole length at once. The other side is that when I start the album half way, that problem is taken care of. So that adds to the positive side of things.

All in all City Club pleases me half of the time, with enough interesting melodies to be on the good side of me. And that club? Apparently it's real. Like Big Star's supermarket, it's right across the street from the recording studio.

You can listen to 'City Club' here: