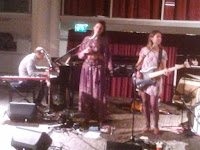 Over the past months in 2016 those interested have been able to follow the creation of the new Elenne May album 'Veggie Patch In The Desert'. From 'Sheep For Fibre' to 'Stairs Raise Children' and finally 'Veggie Patch'.  Three EPs that merged into one album that was presented in the Amstelkerk in Amsterdam on a Wednesday evening.

On stage there were familiar props from the photo shoots for the EPs' and album's artwork, which holds all three. A funny little addition to the (non) stage.

What a fabulous location. The Amstelkerk is a wooden structure from the 17th century on Amstelveld, which is just of the Prinsengracht and just outside of the more famous parts of the city centre of Amsterdam. Hence I had never seen it before. Part of it is a bar and restaurant and a small part was used for a concert. A high wooden ceiling, no stage. The band stood on the same pavement bricks as we, the audience were standing or sitting on. The PA was just two small boxes, but the mix was perfect(ly adjusted to the room). No echoes or other disturbing sounds here.

Elenne May played the whole cd, all 16 tracks, in one go. Where upfront I had the idea that the three EPs had their own distinctive voice and character, live they suited each other very well. Although the final song, 'I Have The Key', remains very much the odd one out.

What struck me most, is how intricate the songs are. Delicate, frail, but certainly not without a bite. Not all is kindness in the songs of Elenne May. Some of the stories have a nastier turn or subject which is emphasized by outbursts in the music. As the music has been worded over the past months, let's focus on those who produce the music. 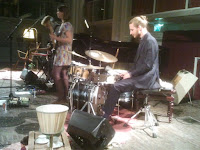 Drummer Eddie Jensen has to hold back for most of the time, but comes up with these intricate patterns and varies in the sound by playing with his hands, brushes, sticks of various shapes and sizes or plays the drums with the aid of other percussion instruments. This way the songs have not only different rhythm patterns, but also distinctly different sounds. At the same time Jensen seems not to object to not playing at all if a song or sequence does not ask for percussion.

Bass player Evelien Ypma is the one who keeps the songs on track. Her bass is the most modest, yet firm instrument in Elenne May. Supportive, strong and played modestly but with confidence. It always holds the middle ground keeping the song together. With her harmony vocals she delivers a second or third voice to songs, creating these little spots of magic that enliven the songs. 'Hold My Hand' is the first example where the singing is just beautiful between the three. 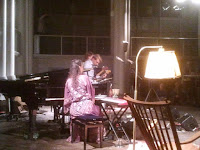 Roeland Scherff is the atmosphere master. Playing guitar is all but playing chords for him. All of the time there are these melodies on the guitar. Softly played or, exceptionally, with a bite, pressing pedals here and there to add a specific effect to his sound. He determines mostly what a song sounds like. And he can play piano to. In two songs he plays the grand piano and seems to become one with it. When his voice joins the two ladies this little extra is added in the singing making it just grand.

Elenne Klok is the leading lady. Her voice carries the songs. Delicate, soft with all sorts of emotions that find their way into the sound of her voice. There are many singers that could be named as comparisons, but mostly Elenne Klok is Elenne Klok, like Elenne May very much is Elenne May. Her keyboard was not always heard properly, but this was altered during the show, so that her atmospheric playing was added to the mix, providing the band with a protective layer, that the rest could play off.

There is a fifth player in the band. One that no can see. The spaces between the music. The emptiness Elenne May allows and dares to create in its music. As if, as I once wrote, we can almost hear something which we just cannot. A silence that can only be heard if the audience truly listens. And it did and all present must have heard that fifth, magical member of Elenne May in the Amstelkerk. It is an integral part of the music, of the sparks of brilliance that make Elenne May so good. 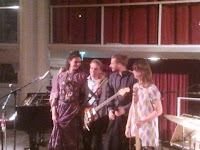 Elenne May played the album in a superb way and shows that it is ready for the next step. That will not be easy, but the quality is unmistakably there. The band holds a beautiful album in its hands. It's time to pick that great single that has to garner the attention of those that have to start listening. If only it was up to me, Elenne May would be all over the radio as Serious Talent and that minute with DWDD and other shows taken care of. Best of luck, Elenne May. With 'Veggie Patch In The Desert' you've struck gold.

And should you ask, what are veggies? I only have to think of my Australian aunt telling my younger cousins: "Come, eat your veggies"! and you might get the point.

You can listen to and buy Elenne May's music here: