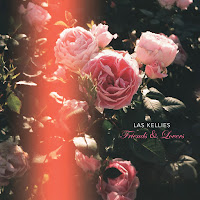 We have a premiere here on WoNoBlog: the first band from Argentina to feature on these pages. Hurray, but if someone had told me Las Kellies is from just around the corner of from London or San Francisco, I would have believed him or her instantly. The sound is so familiar, dreamy, new wave, pop and rocking shoegaze that there is nothing much unique about Las Kellies.

The band started after the three ladies met at a show in Buenos Aires in 2005 and decided to start their own band. So they did and after releasing a record or two decided to tour the rest of the world as well. Two are still together, while the bass player changes nearly by the year it seems. For me Friends & Lovers is a new experience and a nice one.

Reading a story like the above one, makes me wonder what show did they go to and are they playing the kind of music they heard then and there in their own way with their own compositions? It ought to be telling, like the cover is. A rustic picture of roses in a garden, but tainted by light leaking into the camera. The songs on Friends & Lovers have the same sort of tainting. Somewhere beneath the gravelly rock and distorted guitars is a friendly pop song made into something of the post punk era of 1978 till 1981. When guitars still were in the driver's seat, but the mood had changed from exuberant defiance to the bomb is dropping on us any moment. The sort of music that really turned me off, something that was only made worse by the synthesizer darkness that became prominent soon after. Something that I am totally not bothered with on Friends & Lovers.

Las Kellies have a trump card: their voices. The music may be on the dark side. The female voices light up the scene. Sort of the light at the end of the tunnel. Being a trio, the musical spread has to be filled with sounds. The drummer is ever present, filling a large part of the mix. Sil Kelly has to work hard all of the time and sing her part as well. The bass is a solid presence without being in my face the whole time. In fact it is played modestly for a trio setting. The guitar fills in the rest. Rhythm and lead, so two parts in fact. Always with an echo or delay on it. Just like the voices. Bathroom style Ceci Kelly addresses us in a dreamy way. She sounds like 60s French singers; soft, innocent seduction, but beware there's a bite every once in a while underneath it all.

The playing is less innocent. Rooted in The Velvet Underground groundwork, Las Kellies tries to blow me off my feet. Now I'm a big man, but they come a long way. The melodies often work and the riffs and melodies in the songs are interesting. The combinations of darkness, stark riffing and the female voices, just works. It is easy to hear how much further Las Kellies is compared to Hinds whose debut album, 'Leave Me Alone' was reviewed early this year. At best a good starting point. Friends & Lovers is music by an arrivé. Tight, to the point, no frivolities.

I find playing the album once again that it lightens up my day. It shows that so much more can be done with the musical idiom from 1980. Add a hint of 60s pop and darker rock here, a pinch of psychedelia there. In other words a little light here and there, some optimism works a miracle. Las Kellies also manages to walk around the biggest trap of this kind of music, uniformity. There is abundant variety on Friends & Lovers making it a very nice record.

You can listen to 'Summer Breeze' here: