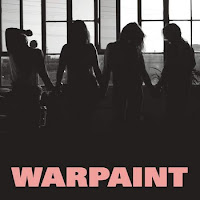 In 2014 Warpaint released one of the best singles of the year 'Love Is To Die'. Is it coincidental that that other masterpiece of 2014 also started with the word "love"? The LVE's 'Love, When You Don't Want It' is only getting airplay in Belgium since the summer of 2016, when Warpaint releases its new album, Heads Up. In both cases patience is a virtue.

Heads Up is a much more direct album then its predecessor. Where 'Warpaint' can be classified as dreampop, Heads Up is more beat oriented and solid. At the heart of things Warpaint has not so much changed. The singing is still of the same layered softness and fleeting in approach. The dreamy element is in tact. The voices could belong to sleepwalkers, stumbling around without seriously hurting themselves.

It is the music that was given an overhaul. The drums and percussion is a frontal force. The guitars are played rhythmically and the bass is to be reckoned with. This foundation gives the singing something psychedelic. Like friendly ghosts in a (thus not so) scary movie.

The outcome can both be light and difficult. The vocal melody may be freeflowing, the playing and the rhythm of 'The Stall' is complex. Fact is that the guitar is back, but not in an easy chord playing way. In several songs The Cure of around 'A Forest' comes to mind, without the high tempo of the song. Note patterns are played. The mix is an extremely heart felt yet cold condition. The music distances itself from me as listener, while drawing me towards it. If I'm in the mood that is. Warpaint is not making it easy on me, but then it never has with its previous records. "Love Is To Die' is an exception in the oeuvre, a song that caught me totally unaware.

On Heads Up the band again explores the possibilities of electronics in its music. Not everything I hear is reproducible by instruments on stage for a four piece band, but by a backing track or computer only. 'Don't Wanna' has all these sounds around the extremely smooth bass sound of Jenny Lee Lindberg. Her bass even reminds me of Robbie Shakespeare here and there. Other instruments fade in and out of the song. The dreamy multi-layered vocals ad to the otherworldliness of the song. On the other hand, in the title song, which is up tempo, there are all sorts of experiments going on during the music as well. As if the song is a playground to be discovered and all there used to the max.

Co-producer Jake Bercovici, who returns after having worked with Warpaint on its first EP in the 00s, managed to keep all the layers in the songs on Heads Up transparent. A feat, as this body of work could have ended up with a muddy, murky sound. The fact that it hasn't attest to the vision the band had in combination with the steering qualities of the external producer.

Taking the whole album in, things towards the end get a bit too much of a good thing to me, but that is just personal. By then Warpaint has convinced me that it has taken an interesting turn in its career and has made me follow it yet again. Heads Up is a fascinating record, which may become a really good one with a few more listening turns.

You can listen to 'New Song' here: