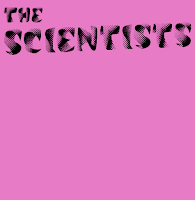 Re-releases come by as many dozens as do regular releases. Not something I usually are extremely keen on. Almost always it is an album that I already have to which some rare songs or outtakes or live versions are added, all aimed at taking out my wallet for something I already have. Every once in a while this is different. Like The Bevis Frond, a band I had never heard music from. The same happened with The Scientists, an Australian punk band that recorded around 1980.

After a few incarnations and names the Perth based band around Kim Salmon released its first eponymous LP in 1981, nick-named for obvious reasons, the pink album. Punk was all but over in the whole world around that time, but not in Perth. The Scientist rocked out in a mix of The Who and U.K. punk of 1976-1977. Because of the time of released the epitaph post-punk is labelled to 'The Scientists'. Not really rightly so, but what's in a name 35 years after the original release.

At the time The Scientists were not really able to kick a dent into a packet of butter. Now people in the know point to the huge influence the band had on later developments. All nice and well, but what does it sound like to my ears in 2016? A lot better than it would have in 1981. The Scientists manage to couple youthful brazenness to enthusiasm and melodic prowess. The different influences from 60s Brill Building pop to 60s rock and (very early) hints at 80s metal to come makes an interesting mix of music. The trio Kim Salmon, Ian Sharples and James Baker seem to do near everything right on this first, and their last album, as the band disbanded fairly soon after the release. Not a huge surprise, as it had been a coming and going of bandmembers from the very start.

It is just this mix that makes 'The Scientists' still interesting to listen to right now. We have to listen through the low standards of production and recording. There most likely was no huge recording budget for this band. Despite that, we are presented with pop gems like 'Sorry Sorry Sorry'. No matter how tough it all sounds, this is pure pop. The fact that an acoustic guitar isn't shunned shows that The Scientists were not afraid to show its influences from the 60s in a very direct way. 'That Girl' is a typical 60s song, with a voice that would never have made the hitparade but certainly a spot on 'Nuggets' had it been recorded in the U.S. in 1966.

It's not all pop on 'The Scientists'. There are some punk gems on the album as well. 'High Noon' really hits all the right spots. Great bass driven song. Fantastic snotty vocal delivering. Lots of excitement going on all around. "This Town ain't Big Enough For The Both Of Us". I don't know who else was around in Perth in 1981, the winner must be obvious if there ever was a musical showdown. The others "have met their maker" for sure.

It is this mix of pure pop and punk that makes 'The Scientists' such an interesting album. Like The Undertones from Northern Ireland The Scientists were able to show both these sides of its music in a convincing way. 'Teenage Kicks' all around it seems, without a need to provoke or resort to tricks. Also 'Looking Through Gary Gilmore's Eyes' by The Adverts comes to mind. The Scientists let its music do the playing and that was a smart choice. 35 Years after the release the strengths of this record are perhaps better heard than ever before. Timeless may be the wrong thing to write, as this music is surely not of this time, but in its sort, oh yes it is.

You can listen to 'Last Night' here: