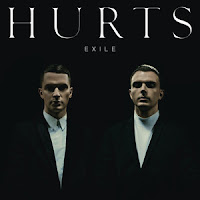 You can listen to 'Exile' here.

Hurts debuted in 2010 with the album 'Happiness'. I remember it most for the fantastic single 'Better than love'. For the rest I did not have patience enough, although I did write a review for WoNo Magazine at the time. My first, second and third impression of Hurts' second album Exile is a lot better. The U.K. duo still shows many influences, but also found a way to present its ideas in a better, more fluent and poppy way. Despite the bandname Exile can be described as a feel good pop album.

Hurts is a duo. Singer Theo Hutchcraft and synthesist Adam Anderson. Children of The Petshop Boys in other words. But where I never listened to an album by The Petshop Boys. I am listening to Exile. Although I will admit that I have to be in the mood to listen to Exile, most of the time the album sits on my good site. The reason for this is that the longing for someone or something is captured in the clear synthesizer sounds of Anderson. They underscore the mood, but do not drag it down to despondency. This is a very thin line Hurts balances on. 'Only you' is a song that I would have hated by any other band, I think. The secret to this mystery is in the voice of Theo Hutchcraft. I just like the sound of it. Like Suede's Brett Anderson's voice, without the tear in the vocal's bends. And there's a little Bono in there as well. Most so in opener 'Exile' which has a distinct U2 flavour over all.

In 'The road' Hurts falls over the edge (no pun intended). It's just plain sluggish. All subtlety gone. The strings in 'Somebody to die for' come dangerously close to the melody of Nena's 'Irgendie, irgendwo, irgendwan (or the English version with Kim Wilde of course). Where 'Mercy' makes up for this. In a song like 'Mercy' the comparisons with  Depeche Mode can be made, but the darker side of The Human League and 'Temptation' by Heaven 17 are not far away either. Although 'Cupid' is rocking a bit more, again Depeche Mode comes a round, with its pulsing synth rhythm.

In reviews I read Hurts is less appreciated because of a lack of its own sound. I can agree to that, but when we set this aside, I am able to take Exile at face value. In the way Theo Hutchcraft dares to show himself at his most vulnerable, like in 'The crow', the potential Hurts has, shines through abundantly. 'The crow' is far from original, but extremely beautiful. So I opt for stating that Hurts is working on finding its own voice and showing growth on Exile, with something left to desire. If album number three shows even more development, nothing stops Hurts from become an Arena filling duo.

You can order Exile here