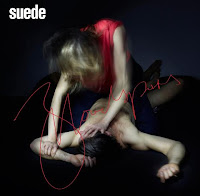 You can listen to 'It starts and ends with you' here.

One day in 1993 I stood with two cds in my hands, but could afford only one at the time: 'New west motel' by The Walkabouts and 'Suede' by Suede. I chose the latter, while the former band became my absolute 90s band having released many cds in the 90s, to become quiet for a large part of the 00s, just like Suede. Bloodsports is the first cd in 11 years after the very weak 'A new morning'. In short I made the wrong choice that day in 1993, although Suede became dear to me with the third and especially fourth record, Coming up (1996) and Head music (1999) respectively. Now a comeback. Let's see how Suede fares in 2013.

The first thing that became clear to me listening to Bloodsports was how much I enjoyed listening to new songs by Suede again. 'Snowblind', the second song, is so classic Suede and deliciously good that I was already keeling over before the album had really started. However, continuing this first listen, this feeling of elation disappeared pretty soon. From the third listen onwards this mood lifted and I started to enjoy myself with Bloodsports. Anderson and co know how to come up with a catchy song and Richard Oakes with guitar lines that screech and squeal all over the place in lieu to a pop song. 'It starts and ends with you', is another such gem that we, the fans, are presented with.

Suede was the front of Britpop. The band broke a year before Oasis and Blur staged a The Stones vs. The Beatles act, milked by the music press, while Suede was humbled in the process. If the former two bands were The Stones and The Beatles, Suede deserves a place like The Kinks or The Small Faces and the band proves it with Bloodsports. The poppy up-tempo songs convince as well as a mid-tempo ballad like 'Sabotage'. Brett Anderson's voice still has this scared puppy quality to it. High, like he's begging, not quite crying and all without annoying (in 90% of the time. He does go over the edge, unavoidably, sometimes with a voice like this). As long there are songs like 'All the strangers' against these few misses, I'm just fine.

The further Bloodsports continues the happier I'm becoming. Suede has found the right mix between ballads and rocking out. 'Hit me' is another hit Suede style. A good guitar line, a killer chorus with Oakes' guitar curling around Anderson's voice. It is in a song like 'Hit me' that the quality of the rest of Suede comes out best. Rhythm section Mat Osman and Simon Gilbert lay down just the right solid background for the other two to excel. Keyboardplayer Neil Codling plays these distinctive synth lines that fill in the holes left. Making Suede a band, the sum and the parts are worked out brilliantly.

Bloodsports goes deeper too. 'What are you not telling me?' is a dark and brooding song, voicing the most dark thoughts on a relationship. 'Always' takes the suspicions one step further: "tell it to me to my face". 'Always' is lighter, but very melancholy. Both songs are more keyboard oriented, leaving more space for Codling compared to Oakes. The middle part is Pink Floyd like -yes, I like it. A lot!- a bit psychedelic before the drums take us back to the chorus. Where the first listening Suede lost me, now these tracks pull me over to the side of Bloodsport making it not just a more than o.k. album, into a great album. It looks like I have another potential favorite for 2013 on my hands. Not the first is it? What makes these songs so good, let me add 'Faultlines' as well, is the meticulous build up. Synths and voice, an interesting guitar line is added, before the rhythm section comes in and disappears again. Suede plays well with dynamics on Bloodsports lending the album depth, intense beauty and nostalgia. It is the trio of songs ending Bloodsports that make the album special and give it its final glossing.

Welcome back, on record, Suede. I remain, your fan,

You can order Bloodsports here