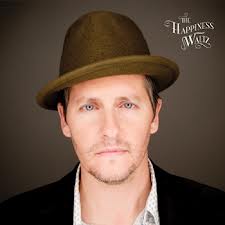 You can listen to 'Happiness waltz' here.

The happiness waltz gets, at best, mixed reviews and some reviewers made a total write off of Josh Rouse and here am I, sitting and wondering why? What I hear is a super relaxed album by a man who seems to be content with himself and the world and shows us just that. There's absolutely nothing wrong with that. Nobody said that everything needs to be doom and gloom all the way and certainly not when Josh Rouse offers such pleasant songs as on The happiness waltz.

The happiness waltz captured me right on with the laid back intro of 'Julie (come out of the rain)'. A beautiful, bitter sweet song about "California grey" that makes the sun come out anyway. Despite the fact that they play in a different musical game, 'Julie' reminds me a lot of the debut album of Fountains of Wayne and especially a song like 'Sick day'. So sad, so sweet and still making the sun come out. Josh Rouse has found that perfect tone on The happiness waltz.

Josh Rouse was born in Nebraska in 1972. He released his first album in 1998, several albums that followed, like '1972' and 'Nashville', were released to critical acclaim, which seems to have left him with his two previous albums. The happiness waltz is his tenth album, excluding five mini albums or EPs. As I already mentioned The happiness waltz is seen as a return to form by some. Let's take a closer look.

Some of the songs on this album, e.g. 'It's good to have you', remind me of albums by the likes of James Taylor, Paul Simon and Crosby & Nash in the 70s. Rouse however has found a poppy element that makes the songs a lot better to digest and enjoy. There is a lightness of tone in the songs, that make the them stand out, despite the fact that the idiom is as old as the road to Rome. The way 'It's good to have you' switches into the chorus, Rouse's voice that goes up, it's near brilliance I've decided.

There is some truth in the fact that The happiness waltz is uniform in sound, but then I have always thought Josh Rouse albums were just that. In part because his voice is often in the same range and his songs do not vary greatly in approach and tempo. So the variations are in the details. The harmonica in 'Start up a family', the electric guitar and the prominent bass in 'The western isles'. Listening to the details gives away many surprises and fun moments, making most songs on The happiness waltz more than worth while. It may take some patience to discover, but there is some truth in the details here. And if you don't recognise the sheer beauty in 'Purple and beige', you are reading the wrong review. It does not come better on The happiness waltz.

It looks like Josh Rouse wanted to bring an ode to his 70s heroes. This is what I derive at listening to The happiness waltz several times intensely. If he aimed for this he succeeded, if he aimed at just making a new album with the best songs he presently has, he succeeded also. The happiness waltz is a deliciously relaxed album, that strikes the right notes many a time. No, there's nothing new going on here, but then does it have to when what is on offer is as good as this? It may just be as good as it gets.

You can order The happiness waltz here