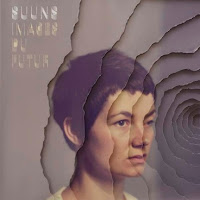 You can listen to 'Edie's dream' here.

The reviews of Suuns new album Images du futur did not invite me to listen, to write the truth here. I did anyway. I'm that sort of guy sometimes when I feel like it. And what I noticed while listening, is that, at least in the two reviews I read, one major item was overlooked: the resemblance between Suuns and Clinic, the UK band who's last album Free reign' was reviewed on this blog last year. (You can read the review here.) 'Powers of ten' and '2020' are straight out of Clinic's songbook. Having said that, do I mind? No, not at all, because Images du futur is a great album in its own right.

Suuns is a band from Montreal (are there bands not coming out of that city nowadays?), a four piece around singer/guitarist Ben Shemie and guitarist/bassist Joe Yarmush. They started the band in 2006 and were joined by keyboardist/bassist Max Henry and drummer Liam O'Neill. In 2010 the band released its debut album 'Zeroes QC', although I understand that we are to see Image du futur as the first album nowadays. For me it's all the same, not being acquainted with 'Zeroes QC'.

The resemblance of the voices of Adrian Blackburn and Ben Shemie is uncanny. Sometimes I'm plain confused, especially as the songs could have been made by Clinic. There is the same mix of eclecticism and held back tension between the songs. The way the music attracts and repels. Despite the fact that Clinic stems from Liverpool it is in the melody in a few songs of Suuns that bring The Beatles to mind. A few harmonies have the spine chilling quality of harmonies like we find on The Beatles or should I write George Harrison's contributions? Most so in 'Holocene city'. Enough comparisons, for now.

Images du futur is a fantastic album. It is full of adventure in sound and melody and rhythm. In other words, it holds several focus points that invite the listener to come back to it. And I have done so over the past few weeks. The up-tempo songs sound hunted down, stressful, but made enjoyable by all the strange noises that permeate the song from different angles. The slower songs have the melodies of the different instruments, modest, bare, but I never know what will fly in next. A weird sound in the background? A keyboard? An electronically reproduced or created sound? Anything is possible. While the bass and drums do something interesting with the rhythm as well. It is never completely straightforward. The drums sound shifting at times, like Phil Selway sounds on 'The king of limbs'. Creating this extra stimulus to listen intently to Images du futur.

Although Images du futur has some psychedelic moments, I would not venture to put this album in line with the several neo-psychedelic albums I have reviewed so far this year. It may be wobbly here and there, there's nothing nostalgic about Images du futur. No escaping the future, that is looked at head on, in all its cold, bleak prospects. This is a here and now album, because of the rhythms, the beats and the sound treatments. All sorts of elements from the past may be used, from The Beatles chorus singing to a Fine Young Cannibals muted guitar line in 'Bambi', it is used to make it sound 2013. Images du futur is a winter album, there is feeling, but under a shivering exterior, making it hard to show these feelings. Ben Shemie sings under cooled, laying a distinct and dominant mood over the album, but it fits the music like a glove. Singer and band are very much one.

A last influence I would like to mention is David Bowie in his Berlin period. The fun thing is, that where Bowie went totally Brian Eno or Kraftwerk, 'V2 Schneider', 'A sense of doubt', 'Neuköln, I totally lost interest. Not so on Images du futur. Well the title song is an exception. This ambient track is not my cup of tea, but in several other songs Suuns combines the ambient like tracks with melody and singing and those are done superbly.