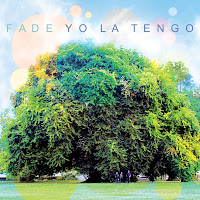 You can listen to 'Ohm' here.

I had to check this to make sure, but Yo La Tengo is around for 29 years. Ira Kaplan and Georgia Hubley started the band in 1984 in Hoboken, New Jersey. James McNew plays bass since the early 90s. Fade is the band's 13th album. The band is still becoming more popular by the album. Somehow I have missed every other album before Fade. In other words, I have a world to discover and that is worth something too.

Fade is in good rotation on my iPod for a while and it became time to own up to the lack of Yo la Tengo in my life. Fade made an end to this and quite rightly so. Fade is a mellow record with sweet sounding instruments, a soft electric piano, a modestly mixed in wah-wah guitar sound, like in 'Well you better'. At the same time the lyric and the rhythm give the song urgency, which is a fairly rare combination. The soft singing and playing versus the driving rhythm and the lyric telling someone to "hurry up before it's too late".

'Paddle forward' is much rougher. Several layers of guitars in different stages of distortion, but mixed modestly, into the background, the mellow voices in front. So even if Yo la Tengo modulates The Velvet Underground and Lou Reed, it has learned to do so more 'Pale blue eyes' like than 'European son' or 'Heroin'. This has a lot to do with the soft voices of Kaplan and Hubley.

The acoustic 'I'll be around' makes a fine contrast. A nice singer-songwriter like guitar motif that goes around and around, that makes Fade a so much more interesting album to listen to. Yes, the composition does remind me of 'Pale blue eyes' and 'Jesus' on 'The Velvet Underground' a lot, but is totally it's own also. Even more because of the organ that plays these forlorn notes with the guitar.

The 60s are a major influence over all. In Georgia Hubley's showcase 'Cornelia and Jane' there are these Lee Hazlewood or Herb Alpert like horns. Giving the somewhat eerie song a more earth like tone. 'The point of it' shows that Yo la Tengo is able to write a fine pop tune also. The execution may be bare, but the likes of The Hollies or Donovan could have made a fine hit from this composition in 1966.

Opening song 'Ohm' is one great feat. I'm almost sure that it is only one chord, a tape loop of a guitar going round and round. At the same time all sort of sound eruptions and extra layers reveal themselves, while the vocal melody is rich. Totally the right decision to open Fade with.

Fade is not a party album. It is a cd that is enjoyed when alone on your coach, headphone on or played loudish and listen to all the nuance that come by. The spacious mix allowing to hear each instrument separately for what its contribution to Fade is. If listened to casually the album may sound bland or not even noticed, passed before you notice. Take notice and a world opens itself to you that is worth spending time in. Fade is an album of fleeting beauty and hidden treasures.

(The origins of the band name goes with a nice anecdote on 1962 New York Mets baseball. You can read it here on Wikipedia.)

You can order Fade here