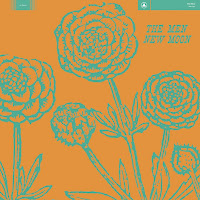 You can listen to 'Electric' here.

Remembering The Men's previous album, 'Open your heart' (read the review here), New moon comes as something of a surprise. First song 'Open the door' is alt.americana, could have been a mellow song on an album of Wilco. A mandoline comes by. It does not have much to do with the gravelly, loud, punk instigated songs that opened 'Open your heart'. The colours on the cover may already tell all, a flower remained. The tempo goes up in 'Half angel half light' and 'Without a face', the music going into folk rock mode, Bob Dylan on steroids. The mouth harp in 'Without a face' a dead give away here. The driving pace, the haunted voice of Mark Perro, singing as if the devil's on his tail, it all shows we are in for a treat.

The music on New moon in the first songs reminds me of a band like The Gaslight Anthem or Larry and his Flask, only due to the pace and directness. Both may have a punk background, but have infused other influences into their music, making it stand out compared to punk(rock) bands. The Men do exactly the same on New moon. The band from Brooklyn is flexing its wings and works other influences into its music. We can hear Neil Young & Crazy Horse at its punkiest in 'I saw her face'. Dark overtones ride in the guitar and bass sound with the guitars playing notes around the chord, which is so typical for the electric, rocking out Neil Young. Of course there is a long guitar solo, playing around a chord progression. With a nice tempo shift towards the end.

Despite the country and folk influences, the sound of the album is rough, perhaps even a bit coarse. The Men have not come to please on New moon. Anger shows through in the presentation of the songs. The instrumental 'High and lonesome' may sound melancholy, it is not a clean song. The production has this layer over it as if we are looking at the band playing behind age old cobwebs.

With 'The brass' the band lets it rip for the first time on New moon. The Men rock/punk out loud, with a typical piano mixed into the wall of guitars, giving 'The brass' a distinct sound, making it special. The Velvet Underground comes into mind because of the staccato way the piano is played and the gravely sound of the guitars. This tempo is continued in 'Electric'.

The way New moon is presented leads to a division in songs. But looking at things from just a little more distance, it is only the first song that really sticks out. The other can be called country of folk punk, the second garage rock or punk, with a touch of The Velvet Underground in its most rocking mode. But then 'I see no one' is close in melody to the first half of the album. The question can be posed whether The Men know what it wants to be. I can answer with who cares as long as they produce songs like these. It is all a matter of expectations. If you want your band to stick to what they do for ever, there is no development. The Men is developing itself and my advice is to follow this development. The avenues they peruse are definitely worth while strolling in. Just listen to a song like 'Bird song'. A The Small Faces electric piano starts the song off, a wild Bob Dylan's harmonica, a great 60s melody making up a fun song, with melancholy streaks that are ingrained in the piano and the voice.

It's only towards the end of New moon  that the experimental side of The Men rears its head. The distorted sounds make The men come close to Black Rebel Motorcycle Club. 'Supermoon' rocks, loud, with call an response between voice and lead guitar. 'Supermoon' is a song where all modesty is pushed down the drain. An end to New moon that confuses. What have I heard before?

The Men grabbed my attention with 'Open your heart'. New moon is an album that is growing on me with each listening. A development as any artist would want it. If you like your punk with some folk and country rock or the other way around, The Men is delivering just that. If you wouldn't mind Wilco to turn around an unchartered corner every once in a while, The Men deliver just that. What will The Men deliver in 2014? A good question.

You can order New moon here