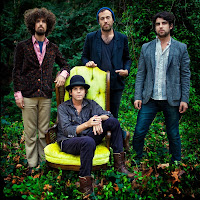 You can listen to 'The way we move' here.

This is a very aptly titled EP. Listen to opening tune 'The way we move' and not before long summertime feelings are upon me. Even on a chilly April night. A few pleasant honky tonk piano notes, slow horns and this rough, rough voice that leads the way. Langhorne Slim & The Law are everything that was before and will ever be on the edge of rock, folk rock, americana, country and soul. As American as this music comes and so, so much fun.

Summertime is the teaser for the new album, 'The way we move', Langhorne Slim put out on the net. The EP is worth some attention on its own. The four songs (plus an acoustic version of opener 'The way we move') show the versatility of the band. From the swing of the title song, to the southern rock of 'Bad luck' and the ballad 'Coffee cups', in which Langhorne Slim goes deep into missing the family, reminiscence and atonement and about going back home from all across the country. "I don't miss the east coast weather, but I miss my mum". It all comes together in the final song 'Summertime'. Striving to compete with the best of Violent Femmes and succeeding with the exception of the best songs on 'Hallowed ground'.

Langhorne Slim is Sean Scolnick, a 32 year old singer/guitarist born in Langhorne, Pennsylvania with Malachi DeLorenzo on drums, David Moore on banjo and keyboard, and Jeff Ratner on bass being The Law. On the record as said we hear more than just this band. Special effects add to the sound and atmosphere without impeding on the basis. Langhorne Slim is active as recording artist since 2004. With five records in the bag Langhorne Slim is currently touring behind his sixth.

Summertime definitely begs for more. The EP is a great teaser. Where the reference to Violent Femmes is a complete correct one, the danger this band showed through some of its songs, this is totally lacking with LS&TL. Good time music with a hint of the darker sides to life, but as Scolnick sings "Bad luck got in me, but I will survive". There is also a hint towards the UK's 60s heroes The Small Faces and to almost every US singer-songwriter with a guitar. Although LS&TL toured with The Lumineers recently, the comparison to this band is not correct, at least in these four songs. The music here is not new-folk. Too much drums and other things going on. Even if the line between the one and the other is thin at times, the way this band approaches its songs does not compare. For that LS&TL is too happy, too much alive as a band, more rock than folk.

In short Langhorne Slim and The Law has released a fun EP. And with a song like 'Summertime' in the can, it must be possible to draw extra attention to this record. A hit and summertime replacement if I ever heard one.

You can download Summertime here.
Gepost door Wo. op 12:07