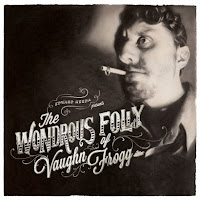 You can listen to 'Dear Brooklyn' here.

The wondrous folly of Vaughn Frogg is the result of a romantic adventure. Man leaves secure job to look at his inner self in the desert and comes home with enough songs for his first album. That is what Edward Herda's website tells us. So much for the story, what about the songs?

The wondrous folly of Vaughn Frogg is a wonderful small album of modest but very self-convinced stories and melodies. Where Herda's voice regularly reminds me of Chuck Prophet's, his songs sure don't. From singer-songwriter to folk or country with a strong early 60s Bob Dylan flavour, Herda is as diverse as Americana artists come and that all in one. Edward Herda sings mostly undercooled, sometimes nearly speaking. Soft is the mood in a highish voice with a hint of a deeper registry. Very pleasant to listen to.

This mood is reflected in the accompaniment. The acoustic guitar is the basis of all. Repetitive chord progressions. Songs do not necessarily have a chorus, which tend to make them boring if nothing else happens. Herda has found ways around that. Other instruments come in, often an harmonica, while percussion or an electric guitar are other options Herda uses. A second voice that comes just after the first like in 'Lover, sing a song I know'.

In 'Toy guitar' it's just an acoustic guitar with a mere hint of static as if the song was recorded in days long gone by. The text is on days passed of buying and playing a toy guitar. The lyric takes some wondrous twists which make listening to the soft, slightly melancholy song an adventure of its own.

The wondrous folly takes many a corner as 'Natural disaster' is this up tempo country, blue grass song that is propelled forward by enthusiasm and speed, showing a completely different side of Edward Herda. 'Dear Brooklyn' is perhaps one of the best songs on the album. I could say the same of 'War at peace'. This song carried by acoustic guitars and a banjo with lap steel stokes in the back ground creates a beautiful atmosphere of desolation and despondency. A song on fatal choices.

'If' takes the price however. Unfortunately I do not know who Herda duets with, but their voices blend beautifully, as they should on lyrics like in 'If'. The song is about a wished for telephone conversation in which two lovers want to get each other totally. The way Herda and his companion sing, lets us listeners know that they mean every word they sing.

If forced to look at something negative, then it could at most be that over a whole album the songs may be just too much of the same, but then all of sudden I hear these beautiful piano notes pop up, changing the tune or strangely treated electric guitar notes, like in 'Michelle's song' and this argument is struck out of my hands. (No more than three lead notes in 'Tiny footsteps'!, making all the difference.) Or that 'Western song' is a bit too much country for my taste? Yes, but it does make The wondrous folly more diverse. In other words it does what it has to do. And my last argument is irrelevant as you will see.

As ugly as the cover of this album may, despite the intricate lettering, the music is interesting and at times intensely beautiful. So do not let yourself be put off by the artwork. Edward Herda has made an album that deserves to be heard. Extremely laid back and still an experience in its own right. Let us know what you were willing to pay.

You can pay whatever you like for The wondrous folly of Vaughn Frogg here.