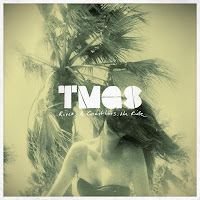 You can listen to and buy Rivers & coastlines: the ride on the TMGS' bandcamp site.

Two weeks ago Erwin Zijleman blogged on this excellent record (click here), today Wo. writes on his opinion.

Just because Big Star sold a few hundred units only during its active career and is now seen as super influential, we, in 2013, have to make sure that TMGS sells a million. At the minimum. And that means a role for you too, dear reader. Rivers & coastlines: The ride is nothing short of a masterpiece. There are so many familiar things on this record and at the same time this record is so astonishingly fresh and new. It sparkles like it just had a Spic & Span treatment.

TMGS is a band from Kalmthout, just across the border, known, at least to me, for its arboretum and heather fields. All the rustic, rural countryside associations I had, have been swept aside by Rivers & coastlines: the ride. Circa 10 years ago, the band started its first incarnation under the name The Moe Green Specials, playing instrumental surf guitar and spaghetti western songs. This slowly evolved into TMGS, a band searching for and more than once finding the perfect pop song. The twang of its days gone by is still to be found on Rivers & coastlines, sparingly but quite clear.

TMGS has a line up that is not your every day's. Kristof Janssens (acoust. & electr. guitar, vocals), Peter Lodiers (electr. guitar, vocals), Dennis Colman (electric bass), Koen Van Loon (trumpet, percussion, vocals), Bart Raats (trumpet), Dirk Van Rosendaal (drums, percussion, vocals), Yves Seyns (keyboards, organ, vocals). Two trumpet players in a seven piece band! And they are heard. Mariachi like sounds sound playfully, full of melancholy. Yes, not unlike in spaghetti westerns. Or in desert music like Calexico's. What TMGS does perfectly is blend these sounds into the perfect pop tune, creating its own universe along the way.

Talking of perfect pop tunes. The intro to 'Evening blues', sung by Kristof Janssens, is tugging the notes along. Like the guitar is being dragged behind the rest of the song. Neil Young style all the way and then there's this organ, full and warm. Under cooled singing, aloof, void of emotions, creating a very good song. Big Star is referenced regularly. TMGS rises to the same heights as this legendary band form Memphis. 'Wolves come out' and 'Headed home' match the same form of longing that 'Thirteen' and 'My life is right' do on '#No.1 record'. The whole sixties from The Beatles to The Byrds and Buffalo Springfield come by. Everything with a twangy Rickenbacker, a Hammond B3, multiple vocal layers and harmonies, blending pop, folk and beat into something new. Not unlike the new Dutch band Sunday Sun. TMGS searches for the possibilities within a song, goes after the ultimate joy of singing, works hard on the arrangements, applies mood, colours and different sounds. There's a huge difference though with Sunday Sun. Where moodwise Sunday Sun is in the full midday sun, TMGS is in the twilight, but the bands are soulmates, as Sunday afternoon vs. Monday morning.

For a band that used to be a-vocal, TMGS singers sing pretty good. No matter how many details TMGS puts into its music, (the moment the trumpets come in during 'Tell everyone' is heavenly!), vocally the band presents itself in a strong and persuasive way. Like Chris Bell or Roger McGuinn, Peter Lodiers also puts this layer of emotion into his voice that puts the mood beyond the here and now, aimed at something behind the horizon. Supported by several band members it makes TMGS a very vocal band.

Rivers & coastlines: the ride is a record to become totally addicted to. I just want to hear it again and again and can listen to it all day long. There is a danger in this, I know. Either I will get bored and discard it or Rivers & coastlines becomes a true favourite album over the years. This remains to be seen. For now I'm enjoying myself tremendously and so should you. TMGS has made one of the very best records of 2013 to date. CHECK IT OUT HERE.