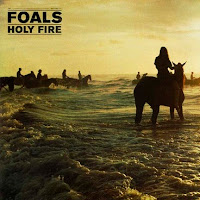 You can listen to 'Inhaler' here.

With the release of album number three it is safe to conclude that Foals is one of the bands to watch as a lover of the more serious modern rock music. 'Antidotes' was a bit too much for me, 'Total life forever' got a positive review in WoNo Magazine circa 2,5 years ago and 'Holy fire' is on the way to undergo the same treatment. Without selling out commercially, Foals is finding its more poppy side, while at the same time producing very interesting music, with some references that are quite surprising.

Let me start with 'Inhaler'. A monument of a song. There is this Phil Collins/Genesis 1980s element in the rhythm, a falsetto voice as if The Scissor Sisters are not the day before yesterdays' thing and at the same time reminds me of Mick Jagger. With some great classic rock guitar work for size. The song is intriguing beyond a doubt......

Foals is a five piece from Oxford. The move to London seems to have allowed the band to move from the head to the heart as well. Yannis Philippakis sings and plays guitar, Jimmy Smith plays guitar, Jack Bevon's on drums, while Walter Gervers and Edwin Congreave sing background vocals and play bass and keyboards respectively. Distinct dance influences, if not plain disco, have permeated the sound, that could well work on dance floors, although I doubt whether this is what Foals aims for. In my dance hey day, the years around 1990, it definitely would have worked, in between songs of Talking Heads, Simple Minds, The Waterboys, with Bee Gees 1978 thrown in for good measure. 'Everytime' has a 'Nightfever' flavour to it, despite the more difficult and multi layered background. Deep down this is pure white men's disco.

'Bad habits' reminds me of 'Change' of Tears for Fears. Especially the gamallan sort of sound in the back ground, with Big Country like guitars. Two bands I used to dance to as well. The question is whether this change of direction is going to be fruitful for Foals in the longer term of its career. Foals has given up part of its uniqueness for something that has been done before (and is played on the radio in return ...). So in the short run it appears a wise choice. On the whole it makes me doubt whether I will listen as long to Holy fire as I did to 'Total life forever' as this album was more multi-layered in its approach and execution.

What remains interesting to explore on Holy fire are the rhythms, the guitar figures and burst of percussive playing. There's a lot going on in 'Providence'. Around the 3 minutes almost more than my brain could translate. In this sense the "old" Foals is still here. Hence my interest in Holy fire as an album. 'Stepson' is more laid back, but has all these layers of sounds that reveal themselves during the course of the song. With a beautiful, very simple but effective cello near the end. The more restrained songs on the album also give Holy fire a bit of a schizoid edge to it, but in the end lift the album to a higher plain. 'Moon' is more impressive than 'Bad habits', but more so by the comparison. A great song with impressive soundscapes that are the main part of it.

All in all the balance certainly falls to the right side. Holy fire deepens the sound of Foals out further and shows new perspectives the band is pursuing. These paths remind me of a lot of music made in the 1980s, but there is enough Foals in the mix to keep things interesting. Where all this leads to in 2015, we will see. For now, let's enjoy it.
?
And as an aside, another great cover. 2013, the year of excellent albums covers?

You can order Holy fire here