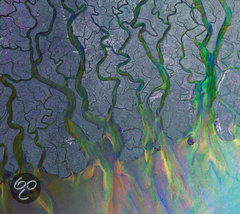 You can listen to 'Tessalate' here.

This album was considered to be the best album of 2013 according to Muziekkrant Oor. I had listened to it once and discarded it as irrelevant somewhere in the passed year. Had I missed anything? Let's say I must have been in a totally wrong mood or accidentally clicked on the wrong album on my iPod. It must have been either of these.

Admittedly, An awesome wave is not an easy album to digest. For that too many "strange" things happen on the album. The listener is taken on an aural trip in which pretty much anything can happen. The songs on the album are beyond a normal structure. By far not as avant garde as on Scott Walkers' last album 'Bish Bosch', but also on An awesome wave cut up techniques in the music seem to have been used. Whole parts seem to have disappeared in a musical black hole. The song that appears to be the most straight forward, 'Fitzpleasure', will still take more concentration to listen to than most people are willing to invest in a piece of music.

Of what I recently heard Alt-J comes closest to Django Django and the Wankelmut remix of 'One day (reckoning song)'. 'Something good' comes very close to this mega hit. Singer Joe Newman does not have an average voice, though not as far out as Asaf Avidan. There are some trip hop influences in the soft beats and vibe in the music. There's Talking Heads in there without the loud, on edge rhythms. In the harmonies Alt-J reminds me of Villeneuf. But most of all, Alt-J is into its own universe. The mix of traditional, there are lots of acoustic guitar sounds on the album, and modern in the form of electronic drums, rhythms and sounds make it a 21st century sort of pop. Almost Gregorian singing mixed with modern rhythms gives some of the songs an almost exalted quality, 'MS' for example.

The album itself is cut up into a few sections through the atmospheric interludes. Starting with 'Intro' and 'Interlude 1' the album only really starts with 'Tessalate' and the listener is already on an aural adventure of some proportions. Most songs are full of surprises and nearly all have a very intense impact as not listening is not an option, if your intention is to get yourself familiar with An awesome wave that is.

The album has definitely grown on me ever since December 2012, but my belated introduction does not change my end list for that year. An awesome wave is an awesome album, inspiring, interesting, but hard to warm to. One song may be for 'Matilda', it is hard to imagine someone being really happy with this tribute. So aloof and under cooled. Listening to the album gave me an experience, not a favourite album. More a piece of art than of music, with a beautiful cover.

You can order An awesome wave here