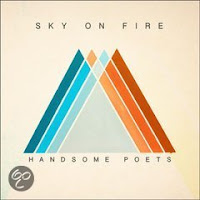 You can listen to 'Sky on fire' here.

Handsome Poets broke big this fall with the first single of its second album Sky on fire. All thanks to national tv that picked out the song with the same name as the signature song for the London olympics. Early in 2011 the band was heard first on the radio with 'Dance (the war is over)'. Later that year I saw the band in Amsterdam, just before Christmas putting down a very enjoyable show. (Read then 10 year old Hein's review here.)

Handsome Poets betray a love for 80s synth pop, not my cup of tea the Nick Kershaws, Howard Joneses. Kajagoogoos and such. While Handsome Poets are quite alright, even fun. Not that I will play Sky on fire everyday, but regularly, yes, I do. The band has this optimist sound and joins that with a great pop feel. In fact, a superior form of pop. 'Sky on fire' may be the big top 5 hit for the band, it's not the best song of the album Sky on fire by far. Handsome Poets delve deeper, touch on Tears for Fears along the way and evoke different emotions.

In the songs on Sky on fire Handsome Poets manages to go beyond the party songs and comes up with several more serious songs like 'Scheveningen' and 'Sing for you'. On the other end there is the fantastic song 'Follow me', one of the best songs of the band to date. Up tempo, up beat, great synth sounds everywhere and this melody I look forward singing to very loud coming May in Amsterdam. The sound is very familiar, as in 80s synth, but the up beat mood makes all the difference. Handsome Poets is not a 80s doom and gloom influenced band, the bomb being no longer a real threat. This shines through. (Will this change if the crisis deepens over the coming years?) 'Sky on fire' also attests to this. The march like rhythm of the verses, the guitar outbursts and the general mood of we, Handsome Poets, are taking on the world. The band may just be doing this with Sky on fire.

That the band looks further than its primary influences proves 'Alright'. This song goes all sorts of ways, bounces of walls and borders, as in Queens hayday, without any copying. The mood and tempo changes are numerous and it works (some Mika?, Robbie Williams?, why not). If anything, this shows the prowess of song writing skills the band possesses and is able to execute as well. A great ending to a fun album.

Without departing from the style the band chose to work in, Handsome Poets shows progress in this second album. No difficult second album sentiments here. The band does what its good at and just seems to have done it a lot better than before. Perhaps Handsome Poets are the cleanest boys on the block, but Sky on fire gives them their part of the block and quite rightly so. More in May, when we go and see the band live.

You can order Sky on fire here