The danger of light. Sophie Hunger (2) 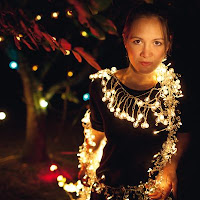 You can listen to 'Can you see me' here.

And again I'm influenced by Erwin Zijleman. Some time back he tipped Sophie Hunger is his contribution to this blog (click here) and I noticed I started playing Sophie's record more and more. Sophie Hunger is from Switzerland. I can't say that a lot of music reaches me from that country. She'll turn 30 six weeks from now. The danger of light is her fifth studio album under her pseudonym since 2006.

The danger of light is a special album for several reasons. Several songs are very playful, convincing and differently arranged than most other albums. Hunger does not let herself be pushed into one corner. English is the main language on the album, but two of Switzerland's official languages also turn up. Some songs have a cabaratesque flavour to them. 'Das neue' could be a song in the middle of a comedy solo performance, reflecting on changes in the world around us, including a new Sophie Hunger (pronounce in German here, please). What also sticks out, is her voice which is a mix with two extremes in it: fragility and toughness.

'Can you see me' is one of my favourites on this album. Part of the song is atmosphere, over which Hunger sings with a beautiful, clear voice. Electronic sounds and a rhythmic pounding make up the basis, a piano drifts in, drums, an electric guitar, only to disappear again and all the time the song has a great melody. In general this is her approach on The danger of light. Sophie Hunger is not afraid of silences in her songs. This allows for great dynamics as the instruments are faded into and out of the mix. The element of surprise is huge as the listener never knows what will happen next and even after several turns at listening surprises keep turning up. Which makes this album so much fun to listen to. In 'Heharun' almost all instruments that make up the song fade out, to make room for a trumpet to finish the song in a clear sound.

In the rhythms there is a slight hint to hip hop, but the closest comparison is The xx. Sophie Hunger is musically much more developed than her London based colleagues and the possibilities her education offer her shine through the whole of The danger of light. This makes her album more varied, at least as tense and certainly as good as 'Coexist'. (If you're interested in my review of Coexist, click here.)

A lot of effort has gone into making The danger of light sound special. 'The fallen' has elements of songs that female singers like Katie Melua may present in a song, but Hunger dives into different rhythms, arrangements and makes 'The fallen' everything Melua does not offer. Jazzy influences in the horns glow like wild animals on a leash. Under control, but with a hint of danger. The late night night club atmosphere of 'Perpatrator' is underscored by the muted horn, but set off by the muffled guitar in some parts, making 'Perpatrator' a very special and under cooled, but exciting song. It's in elements like this that The danger of light totally convinces and is special. By the time a Bob Dylan like harmonica kicks in the final minutes of the album, I was already totally won over.

In the music meant to listen to seriously segment The danger of light is an album that begs to be listened to. Sophie Hunger deserves to become better known in this part of the world and any other come to that. This is a free tip from

You can order The danger of darkness here