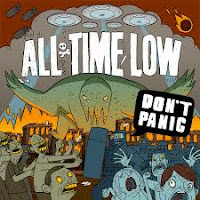 You can listen to 'For Baltimore' here.

How many of these band operating between punk rock and emo are there? Loads and loads is my guess and every once in a while one crosses my path. This time it's All Time Low, a band stemming from Towson, Maryland in the US of A. Don't panic is its fifth studio album and the first I've noticed. If anything stands out on Don't panic, it's the slickness of the production. Fine tuned to rock radio. At the basis a song like 'Backseat serenade' could have been recorded by 80s hair bands, but also by someone the likes of Bruno Mars. Some minor adjustments in the production would have taken care of the necessary differences. So do I like this album?

I have my doubts, but I have to say that I like the drumming for a start. Rian Dawson is all over the place, with a strategic silence followed by a fill before the rhythm is pounded out again. This is a hard hitter, but with inventiveness and all the right accents. So at the basis this album is alright. And I've noticed a big difference. I like the album on the sound system and I do not care a lot for it on the head phone.

Most songs are very conservative. All Time low does not take any chances musically. The rather smooth, almost juvenile voice of Alex Gaskarth tops this all off. This is what I hold against Don't panic most. Despite the fact that the band comes close to music other bands in their genre play, it's too mellow. Like The Jacksons almost in it's 'Blame it on the boogie' phase. That does not mean that the songs are not good enough. Far from it. There is just not much setting them apart from the fold. Titles like 'The irony of choking on a lifesaver' or 'So long and thanks for all the booze' suggest originality, the songs do not. Although the former song is one that is apart from the supple flowing punkrock songs that come before it and the latter has a few great singing melodies and harmonies in it.

All Time Low knows how to write a song. Most songs on Don't panic prove just this, what attracted me hearing the album in the background in the first place. Listening up close a few times, I conclude that it's the production that stopped me from truly liking the album. Don't panic does not offer enough variation that really makes it stick. The potential is there, but there is more to music than just a smooth flowing wall of guitars and slick singing in a slightly pained and groping voice. The few times the band starts out with a clearly different intro, I prick up my ears, but all intros are just an excuse to run back to where it left off in the previous song. My conclusion is that there's more to All Time Low than it lets us listen to. So how knows what the future brings?

You can order Don't panic here


P.S. This is WoNoVice's reference in the comment section: