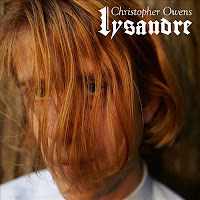 You can listen to 'Here we go' here.

Christopher Owens was a member of the band/duo Girls that released two albums. Album (2009) and Father son, holy ghost (2011). The latter album I played for a while, till I forgot it somehow. Last year he announced that he left the band to start a solo career. Lysandre is his first effort as such.

Lysandre starts off very soft spoken and undercooled, with Owens' drawling voice singing soft over the acoustic music. The word that springs to mind is beauty, the kind you look at, but are not allowed to touch. For most part the album remains aloof, does not invite me to come closer. At the same time the songs appeal to me. This paradoxical feeling doesn't leave me for the whole album.

The instrumental opening 'Lysandre's theme' and first single 'Here we go' packed me in straight away. 'Here we go' and title song 'Lysandre', allegedly the name of a French girl Owens met on the first tour of Girls, are good examples of what I mean. The moment Cally Robinson sings in duet with Owens there is beauty in the room, but it's cold. Owens is telling the story of this first tour in 2008 set to music, but as if he's looking at his own picture book, on his own. Only at the very last he seems to let go somewhat and the selfish mood is lifted in the up tempo 'Part of me (Lysandre's epilogue)'.

Part of my explanation is the way Owens sings. Without too much expression. His frashing resembles Chuck Prophet's and his voice Elliot Smith's, but no way his voice sucks you into his songs! But enough on this. If I concentrate on what is on offer, I have to say that I like mostly what I hear. There's enough of Donovan, Harry Nilsson, Cat Stevens and other 60s and 70s singer-songwriters in here to make my day a little brighter for a while. Lysandre offers a nice mix of ballads and more up tempo songs with enough differences in the instruments flashing out the songs to keep the album interesting. The beautiful ballad 'Here we go' is followed by the up tempo and good time fun of 'New York City' with saxophone and all. With the exception of the oddly placed 'Riviera rock', in the middle of the album, there is no dip to be found on Lysandre. Let's just say that this song is Christopher Owens' take on Typical Tropical's 'Barbados'.

Lysandre is a short album. 29 minutes and it is all over. Don't be put off by that fact, as there are 25 minutes that are quite pleasant to listen to. At the basis is Owens' acoustic guitar (and drums-bass). From there producer Doug Boehm allows embellishments. Some time a flute, a keyboard, saxophone or electric guitar. And female voices. They are there to set a mood, not to fill or make extra noise. I just love 'Here we go' with the melancholy harmonica, the loud guitar part, the flute!, the melody. In 'Here we go again' are a great 'Make me smile' "o la la la" harmonies. Boehm gave the soft voice of Owens the background that makes it shine instead of forcing it to go all out.

Lysandre is an album that is not of 2013. In the quality of sound, yes, but in mood and music? No, this is pure nostalgia, a trip down memory lane. On a song like 'Everywhere you knew' and the instrumental 'Closing theme' Nick Drake may have wanted to do his thing. Closing song 'Part of me' is a new version of 'Everybody's talking'. Christopher Owens has listened very well to old heroes and made it his own on Lysandre. One thing though, what an ugly cover!, but it does underscore my feeling as a whole on the album. Lysandre as classical work? Well, there is this recurring theme for those who pay attention.

You can order Lysandre here