The Pogues in Paris: The 30th anniversary concert at the Olympia. The Pogues 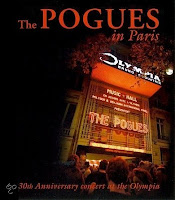 You can listen to 'Fiesta' here.

Having had Dropkick Murphys on the blog post earlier this year, let's have a look at "the fathers" of the Boston lads. The Pogues have been sort of with me for just short of 30 years from its second album 'Rum, sodomy & lash' and in the party sense with 'Fiesta', one of the absolute best party songs ever. Highlight of many a feast in the late 80s and early 90s. Not much later Shane MacGowan left the band, or was made to leave and more or less took the ghost of the band with him, drinking himself into oblivion. I must say that I was surprised running into this 30 year anniversary album, with Shane MacGowan on board, or what's left of him. What we can hear here, is total rock and roll annihilation. But, despite the fact that it's almost impossible for him to communicate legibly, in the songs it hardly matters. The foundation and experience of the band holds him up and supports him to finish as he should, building a party up the whole time for the length of a double album.

Many a Irish folkpunk classic comes by, showing how good The Pogues really are. To own up to history, I have to admit that this music sits better with me than 30 years ago. Of course, and close readers of this blog will know I'm no fan of 80s music in general, 'Rum, sodomy & lash', is one of the major exception to this decade, this music was not my favourite form of music. Dropkick Murphys changed that in the 00s. Now I can listen to '... in Paris' all the way and can't sit still nor refrain from singing along.

The Pogues offer an inlook into a culture of ages, but do so with late 20th century gusto, impossible without the influence of late 70s punk. The mix works well with its own songs as with covers of songs of old. The Pogues have become one of those bands that seem to be able to tour forever, without any new music as they have made a lasting impression with the few albums they made in the 80s, songs that people around the globe wish to hear time and again. On their own accord and nothing to do with golden oldies nostalgia parties that some artists make a decent living on.

My favorite The Pogues song is not on this album. Too slow probably for a party. 'And the band played Waltzing Matilda' is my absolute number one. 'Fiesta' comes close, as do 'Dirty old town' and 'A pair of brown eyes'. They are all here, 'Fiesta' closing off the album and I suppose the show. Looking at this mix of songs, it makes clear that The Pogues are capable of moving to tears as well as build a party. The longing, hurt and smart of a whole people are put into its songs. Even when the band makes them dance, the hurt is never far away. The individual hurt and longing for a lost past and health that is portrayed in Eric Bogle's '... Waltzing Matilda' reflects the pain of a whole generation. Total, spine chilling beauty.

That leaves me to reflect on the streams of whiskey and beer. MacGowan studied these streams from up close as we can hear. Perhaps at first it helped him to focus on what we now know as the output of The Pogues, I'm more inclined to reflect on what we have missed because of it. Of course it is impossible to know, but anyone able to write songs and interpret songs of this class should have been capable of coming up with more like it. If they were, they have been dissolved in streams of whiskey, quite appropriately the start of this album.

The album is released as a cd and a dvd. I'm sure going to check the latter out as well. For now, let's party once more on 'Fiesta'. As the mobile phone video, see the link provided above, attests to, a The Pogues show may put pure energy and enthusiasm above absolute quality and technical skills (hence there may be an overdub here and there on the cd), energy is offered abundantly. And that is worth something in this day and age.

You can order The Pogues in Paris here