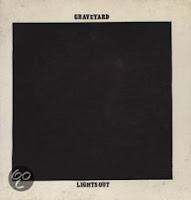 You can listen to 'Goliath' here.

Graveyard is a Swedish hardrock band formed in Gothenborg in 2006. To date the band has three albums to its name, Graveyard (2007), Hisingen blues (2011) and Lights out (2012). Fans of hardrock can gorge on this album as influences from all around are incorporated into Lights out.

Joakim Nilsson's voice is where the sound of Graveyard starts off with. His rough sounding voice has this hardrock pitch that is needed to excel in this genre. It's at its best in the ballads, in the more up-tempo songs Nilsson sounds strained at times, but let's face it: that is not exactly unusual in rock. His voice reminds me of David Coverdale, without the screams, as well as Ian Cook. And from this voice the influences in the music go all out.

There's pure classic rock as played by Black Sabbath and Deep Purple in the early 70s.'The suits, the law & the uniforms' is classic rock. Double tracked vocals, layered guitars, loud riffing and a rhythm that just begs for heads to move up and down with it. "Simple", effective and to the point, with some guitar outings towards the end. This is one side to Graveyard.

What surprised me is how close 'Endless night' comes to Bent, Oregon's pride Larry and his Flask. Despite the total difference in approach in instrument use, 'Endless night' could have been a song on 'All that we know'. It's rough and has a country/folk punk flavour.

Graveyard rises to the occasion in the more ballady 'Hard time lovin''. Nilsson's voice travels towards the Jim Morrison side of  his range. An organ is added to the sound, enriching Lights out as a whole. Led Zeppelin is not very far away in this song as is underscored by the lead guitar lines. A pretty good song it is too.

The diversity of Lights out makes it a very attractive album in its genre. As does the focus in the songs. Not much time is wasted on drawing songs out beyond necessary steps. This is a band playing and not a collection of musicians competing for the most attention. Guitar solo and breaks in 'Goliath' are there, but to the point and adding to the song as a whole, not to the ego of the individual player, something that turns me off from Cream, Led Zep or Deep Purple, particularly when they went all out live.

Lights out ends with 'Fool in the end' and '20/20'. Two more examples of how good this band is. The melodic rock of the former and the bluesy latter stand out. Despite the fact that guitars and drums are the basis, you will find a fine piano tucked away within 20/20. Sparingly Graveyard adds to the picture to make its songs more special. Swedish hard rock? Yes, and very worthwhile listening to too.

You can order Lights out here