These are the good times people. The Presidents of the United States of America 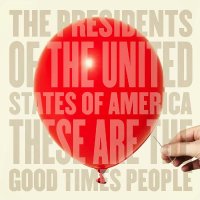 You can listen to 'Ladybug' here.

Going through my enormous collection of records, I noticed a record I do not remember buying, being given, not even stealing for that. Strange, as it was an album that I was looking forward to listening for years at the time.

The Presidents of the United States of America (PUSA) broke in The Netherlands in 1995 with the same three hits as in the rest of the world: 'Kitty', 'Lumb' and 'Peaches'. Two records followed that did not continue the success after which it became silent for several years. The break did the band good as 'Love everybody' of 2004 was one of the best punkpop albums ever. With the deeply philosophical study into the difference in the psyche of boys and girls 'Poke and destroy' as the absolute winner of 'Love everybody'. I saw the show in Het Paard in The Hague, a big party, smiles on everybody's faces. This album still comes by regularly and I enjoy it to this day. And then it became silent again, but now I found out that it didn't for nine years at a time, but four. 2008 saw These are the good times people. Please let me amend my erring ways.

PUSA is a band with a gimmick, Five snares are shared between two guitarists. In the end this worked against the band, as people focussed on the gimmick and forgot to hear what a great songwriter Chris Ballew is and what a great band, with a keen ear for melody and harmonies PUSA really is. These are the good times attests to this from the first song onwards. Some things have changed as "guitbassist" (three snares) Dave Dederer left the band and was replaced by Andrew MacKeag. Jason Finn is still on drums and together they go for great harmonies, not unlike The Kik, the early 60s beat element is just hidden a bit better with PUSA.

Chris Ballew has a strange fascination for animals and especially the small insect like ones in his lyrics. Again  several come by in the songs, but also a Bee(a)tle called John. There are also horns lighting up three of the songs and acoustic guitars. PUSA uses more extreme dynamics in several songs, so as a listener it is necessary to be patient for the party element to arrive. At the same time these dynamics gives the songs more depth and growth potential. A song like 'More bad times' appears to be very average, until the chorus is released on the listener.

These are the good time people, released in 2008, so irony or prophecy this title?, may be less exultingly pure punk pop, a song like 'French girl' proves that in this segment of music songs do not come much better. And I'm not even talking about 'Ghosts are everywhere' yet. It does come better than 'French girl'! 'Truckshop butterfly' allows for some country influences and 'Flame is love' has some jazzy stuff going on, all showing again that PUSA is flexing wings.

Where Fountains of Wayne only allows from a grim smile these days, faintly remembering the great songs in the 90s that made the sun come out on a dark, cloudy day, PUSA is delivering better than in the 90s. Yes, there's this gimmick, but look through it people, as this band knows how to write a song and present it in great form. How is it possible that I either missed this or did not hear it and laid These are the good time people aside in 2008? I think I did my best at making amends.

You can order These are the good times people here