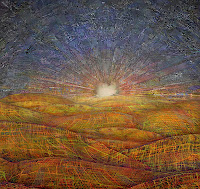 You can listen to 'Thistle' here.

Hundred Waters is a band that is around since 2011 and is from Gainsville, the town in Florida Muddy Waters almost defiantly mentioned in his great song 'Deep down in Florida' on 'Hard again'. Hundred Waters has nothing to do with the loud electric blues Waters recorded with Johnny Winters in the 70s, anything but even. Hundred Waters is pastoral, atmospheric and striving for beauty. Like the cover of the album, a beautiful sunrise (or set) bringing out spectacular colours to the fore in the landscape, like a giant peacock's tail in the sky. The name of the band is derived from Austrian painter, artist and architect Friedensreich Hundertwasser (Friedrich Stowasser), an artist who impressed me many a time (and not just in museums, but in unexpected geographical places as well). So, if we are talking colours and beauty...

The music on Hundred Waters has a strange effect on me. I come back to it again and again, but am repelled and attracted depending on my mood, but this reaction is so extreme that it can happen to me within one song and several times at that. 'Boreal' is the best example to underscore this I can think of. The strange rhythms and part of the fast paced synth sounds repel, while the singing attracts. In other songs it is the high, unstable voice that almost has the effect of nails on a blackboard to me. In the rhythm there are influences from dance. Triphop can be mentioned as there are some resemblances to e.g. Portishead, without the scratching. All this makes Hundred Waters fairly unique for me, as there are no other albums in this genre I have ever listened to often before.

What grabs me most on this album is the atmosphere. It's tranquil at times and allows my mind to wander in the directions the music and melody lead me. Sort of like meandering down a slow river, with loads of broad bends, carved out in the mountainous landscape. Loads to hear, some beautiful and some not. 'And-or' is ethereal, so thin and relaxed, that it comes close to meditating, while opening song 'Sonnet' is pure beauty. It reminds of me a song like 'Coming back to me' on Jefferson Airplane's 'Surrealistic pillow'. The same intricate playing and soft singing, while the suggestion of all sorts of sounds hangs in the air, but can't be heard. As if they still hang in the air in the studio from a former recording session. Until 'Sonnet' flashes out that is and the instruments do fade into the mix. This hints at a folk influence in the music of Hundred Waters. Which is there, in the flute, in the melodies of the songs. Just listen to 'Thistle' and you'll here the pastoral quality hidden in the song. The voices of Nicole Miglis and Sam Moss blend during most of the album, both singing soft-voiced, Kate Bush light, not so much pleasant to listen to as perfectly fitting in this context.

The music is a mix of modern rhythms and soundscapes with traditional acoustic instruments. Piano, guitar, flute, strings, horns. There is some traditional drumming on the album as well. The contrast in atmosphere between the acoustic 'Sonnet' and the electronic 'Visitor', song one and two on Hundred Waters, is the example of what makes the album so intriguing. While the way the songs are filled in are totally different, the mood of mysticism and perhaps even otherworldliness remains the same. A better way to explain why I keep listening to Hundred Waters I can't give you.

You can order Hundred Waters here