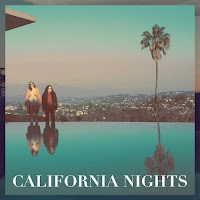 Best Coast can be found on these pages once before with its EP 'Fade Away' (read here: http://wonomagazine.blogspot.nl/2014/02/fade-away-ep-best-coast.html). The EP came as something of a surprise to me, as I hadn't heard anything much in the duo's previous efforts. Admitting that I never tried those again, California Nights is as much fun as 'Fade Away' was. The 60s girl pop singing of Bethany Cosentino is extremely infectious to my mood. As far as I'm in need of any lifting of moods, it is certainly gets the job done.

California Nights directly gripped me on first listen. Actually, I'm typing during the first listen so the final words are not written in this session. For that a sense of balance is missing at the moment. The album holds the louder kind of pop, guitars and drums laden, with the at times multi layered vocals laid right on top. Phil Spector girl vocal groups, right up to The Bangles and all those modern day girl bands jump from the digital environment to me to pack me in. The older 'Eight arms to hold you', that beautiful album by Veruca Salt, becomes, the bigger its influence seems to become. It's all over this California Nights. Despite that the influences of Best Coast are all over the place, the reason why I like California Nights is that pop and rock are mixed in the right doses. The voice and melodies are very much pop, the musical environment move towards a sixties and indie rock setting. The secret is in the level of blending that Cosentino and her brother in arms Bobb Bruno attained in collaboration with producer Wally Gagel. Is it a coincidence that Gagel also produced 'Fade Away', the EP I also liked a lot in 2013? Probably not.

The cover of this album is extremely well chosen (and shot). Despite the overall poppy feeling of California Nights manifesting itself in the high guitar notes, there also is a deep sense of melancholy over the album. Cosentino may sing "I'm feeling OK" in the first song on this album, it seems somewhat relative. As if something bad has just happened, but she came out o.k., but not in all ways. In other words like the end of the of warm, dry day, you're standing at the edge of the pool not wanting the day to end, but end it will.

The melancholy is in the tone of voice of Bethany Cosentino. 'Heaven Sent' certainly is an upbeat song. Powerful, tight, poppy, but the sun just doesn't shine in her voice nor her vocal melodies. The sun shines like in southern California in the music though. What a great pop rock song 'Heaven Sent' is. In all the right places a nice sound comes forward, an effect on the guitar or a harmony. Exactly what I think is the strong point of California Nights. Nearly every song holds these strong points, that make them stand out.

The only negative point that I could find, is that there is not one note of originality on California Nights. This sort of music has been played for several decades by now. It may be that it has become in vogue again in the past three years, but that is all. California Nights adds a very nice album to that long line. It's a great mix of the sorts of music that I really like, with some that I do not care particularly about. Best Coast succeeds in creating an album that does a take on the weaker points in the music of others and turn it into strong ones. So, I'm never complaining listening to California Nights.

When the tempo goes down in the title song, I got a small fright at first, but this went away as the song delivers also. Best Coast deals with a ballad in the right way, without turning it into a sticky, siropy kind of song that makes my teeth hurt bad. Another point scored.

You can listen to title song 'California nights' here: