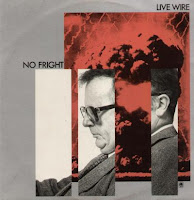 Every once in a while I take you on a trip down my personal musical memory lane. Today to a fairly obscure album from a U.K. band that released only three records between 1979 and 1981, the others are 'Pick it up' and 'Changes made', of which the second one, No fright, is simply amazing.

No fright is one of my all time favourites, played so much through the years and still the sound of the LP is fantastic. Only a few weeks back I took it out of my stack of LPs and played it from back to end a few times straight. Looking back almost 35 years, the cynical thing to say is that Live Wire got its record contract because of Dire Straits. The record company hoping that they had the next one. There are some similarities in music and singing that can be noticed. Still, No fright has stand the test of time better than 'Dire Straits' as a whole album, I think. The new wave, post punk elements that are woven into the music of Live Wire, especially by the guitar eruptions of lead-guitarist Simon Boswell, that are very Gang of Four like, go beyond anything Mark Knopfler c.s. ever made. This is not all. The spacious mix of the music makes a nod to dub and reggae, while at the same time the band is able to rock out and play most delicately. That sounds like a lot of music that was fashionable at the time and is up to a certain extend again and might give you the impression that Live Wire were mere copycats. Far from it, I'd say. It's the mix of all this and what Live Wire did with it, that made and makes No fright stand out for 33 years and counting.

The album cover is so 1980. The fear of a nuclear explosion which was all around in combination with a conservative father figure who seems to be going about his business as usual, while being torn apart graphically. The mushroomcloud resembling his brain, blown out of his skull. Somehow it spoke volumes then. (1981's 'Red skies over paradise' anyone?)

Live Wire was a four some in 1980. Mike Edwards sang and played guitar. Simon Boswell played guitar and keyboards and did backing vocals. Jeremy Meek on bass and backing vocals and German Gonzales on drums. According to a posting on You Tube, Gonzales came from Peru as a refugee to play in a rock band. Jeremy Meek is, as far as I'm aware, the only who has surfaced regularly since Live Wire disbanded somewhere after 1981. E.g. in The The and now in Paul Carrack's band. The album was produced by Simon Boswell in a Steve Lillywhite style with loads of echo and spaciousness on the singing and instruments. A production that makes the album still sound great.

The songs on No fright are quite varied. From the new wave-funky 'Fight for your right'... to the up tempo 'No fright' or the ballad 'Castle in every Swiss cottage', Live Wire delivers. The band was able to play these different styles in a convincing way with loads of echo on everything. The up-tempo songs are in your face, punky and rioting at elders. Thrown in like a piece of meat to a tiger. This makes the impact direct and confronting. The lyrics are very direct also "Don't bite hand that feeds you, they mean", "We ain't gonna fight for your rights, hell no more". There is a hint of politics there in the early phase of the Thatcher era. 'No fright' seems more like a nightmare in which all goes wrong. Dancing on the volcano, but to a great soundtrack. By far the best song of the album. I even wonder if Franz Ferdinand's keyboard on there current fantastic single 'Love illumination' wasn't inspired by the one on 'No Fright'.

No fright is an album, not many people will remember, let alone know of. It was only one year more and Live Wire was never heard of again. They left behind one masterpiece, with a great sound, with great varied songwriting and performance. An album that deserves recognition as it was more than able to compete with Joe Jackson Band's debut album, Fischer-Z', The Police's debut album and other bands that scored hits around that day. Live Wire's songs are at least as good and deserve to be in the same league. Gang of Four with real songs! So fans of Franz Ferdinand, Arctic Monkeys and the likes, this is something to check out. I have no illusion concerning this post making a difference, but if only a few more people are to give it a try and learn about the band, that would be justice. And should you like it, don't forget to tell your friends. Spread the word!

You can listen to studio recording (straight from record) 'First night every night' here or live recording 'No fright' here.