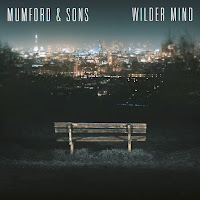 Those who follow this blog regularly may be surprised that Mumford & Sons found its way to these pages. The band was often compared to other bands in the neo-folk segment of music and always came out the worse for wear. Even when I read that Wilder Mind would be a totally different album than the two previous ones, I did not expect to like the album. I gave the album a try and boy was I in for a surprise.

Yes, Mumford & Sons rocks out with electric guitars, drums, like many other bands do. It seems like they listened closely to Coldplay and wrote better songs, that are so much more alive. Coldplay at the time of its second album so to say. That the band recorded demo's in the studio of The National's Aaron Dessner, also shines through in some of the songs. That layer of seriousness over the songs is very recognisable.

Mumford & Sons takes a giant risk with this album. The fanbase that has brought the band to the largest festivals as headliner and arena sized shows may totally not like what is going on here. It has nothing to do with what the band used to do. It's not as if the band is in transition towards a different sound. No, smack dab, here's Wilder Mind. The band feels like it is a transition, as for them it was a slow process to different songs that started during the 'Babel' tour. For us listeners things are quite different. Fascinating it is though, as there are so little bands that dare to make a radical move like this one. Tim Knol did recently, but under a band's name. It happens with lesser known bands that hop on the bandwagon of a new popular form of music, it's seldom the larger ones. Someone like David Bowie could afford to do this in the 70s and became ever more popular.

There's no need to be more difficult here than strictly necessary. Mumford & Sons plays the kind of music on Wilder Mind like many other band played it in the past decades. It is rocking out in what for this band is a new avenue, but for many others a well-beaten path. So all comes down to the quality of the music, the melodies, the way it is played and the production. Mumford & Sons have the credit to work on an album, even if this one in a sense is a second debut album. The result sounds like this rare combination: A well accomplished album and "new" music.

The songs on Wilder Mind are fairly interchangeable. I don't mean this in a bad way as I seem to like them all. The more up tempo ones as well as the more serious ones. The fun starts when the details are revealed, like e.g. when the frantic drumming starts in 'Snake Eyes'. Later the song even explodes in a way that Coldplay seems to have lost a long time ago. The better for Mumford & Sons.

The biggest downside to Wilder Mind is it has an extremely slick sound. All is well-polished, without any hiccups or glitches. The sound is groomed until this neat adult kind of rock came out. Well, there's a time and place for everything, so also for the music on Wilder Mind. Almost all songs have elements that can rock out in a tremendous way in combination with passages that are going to be asked to sing along with. The main question for the band is whether its fans are willing to make the transition and/or enough new fans tag on. If the uptempo songs on Mumford & Sons succeed at the festivals and in the arenas they'll undoubtedly be playing in the coming year, they will succeed in this change. In rhat case Wilder Mind is going to make Mumford & Sons bigger than it is today. Let me finish with a thumbs up for the beautiful cover.

You can listen to 'Believe' here: