Let It Bleed. The Rolling Stones 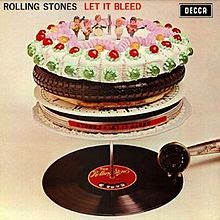 We pick up the 1968 and 1969 series with the album that, sort of, holds the first single Wo. remembers being released by The Rolling Stones, 'Honky Tonk Woman'. In the fall of 1968 the Stones' single was 'Street fighting man' taken off 'Beggars banquet'. This did become his first single of the band though. His neighbour friend gave it to him, when he had enough of it. Both albums are among Wo's favourite 60s albums, as you can see on his list on the Dutch website MusicMeter.nl.

Let It Bleed is The Rolling Stones' 8th album and one of the four that are seen as its best, released between 1968 and 1972, in a period that the band released an album per year or more in the previous years. Seen from the view of 'Beggars Banquet' released in the fall of 1968, by December 1969 the band had progressed further in things U.S. folk, country blues and country. Where 'Beggars Banquet' was lauded as a return to its rock roots, Let It Bleed moves so much further and provides a depth that allowed the band basically to do anything in the years to follow.

There's a funny fact here. I probably bought the LP in 1979 or 1980 and did not really like it at the time, where I loved 'Beggars Banquet'. Too much acoustic things were on it. Songs I now recognise as country and country blues, I just did not care too much for then. In 2015 I notice that there is not a weak song on this album (and had before of course, but I'm listening differently now). If something is weak, it's Mick Jagger's singing. His voice doesn't suit everything present here. It doesn't bring the album down though, it's what makes it complete.

'Gimme Shelter' opens the album. The song still graces each live show right up to this day as it is the show piece of backing vocalist Lisa Fisher, who gets centre stage for just as long as Mick Jagger can stand to not have the lights on him. Ms. Fisher is not on the original recording though. Merry Clayton is the vocalist on duty there. If anything this album has a host of guests performing. Some may come by later.

At the heart of this album The Rolling Stones is a four piece band on 'Let it bleed'. Brian Jones is present on two songs playing congas on 'Midnight Rambler' and autoharp on 'You Got the Silver'. Mick Taylor also is present only on two songs 'Country Honk' and 'Live With Me'. Keith Richard, as he called himself in those days, does all other guitar duties, with Ry Cooder doing the slide guitar on 'Let it Bleed'. He's bleeding all over there alright. One of the most memorable leads in the history of The Rolling Stones.

Back to 'Gimme Shelter'. This fantastic song opens one of The Rolling Stones' best albums. Great guitar work starts the song. Keith Richard may have been digressing into some bad habits by then, his guitar playing is full of lightness, tight, spawned by inner musical strength and imagination. The different parts weave in and out, keeping up with the drums of Charlie Watts and the percussion that is mixed into the drumming, played by producer Jimmy Miller. Love may only be a kiss away or a shot, this storm of a song is here for eternity. Never a single, but one of the best Stones songs. The interaction between Jagger and Clayton, who blows him of the stage, like Lisa Fisher does, is fabulous. Jagger has to work harder here and does, coming to one of the best vocal performances. Some dirty harmonica adds to the desperation. And Keith? He comes up with this brilliant solo. "Gimme shelter' is a song that is totally contemporary as well. Millions are singing it at the gates of the western world.

The mood comes totally down with 'Love In Vain'. Keith doing two takes on Robert Johnson's playing. The acoustic guitar doing the main part and an electric slide guitar. Ry Cooder comes in for the mandolin accompaniment and solo. It is Jagger who comes up short here. His voice does not have the depth to make the despair come alive in a believable way. I just like the 1970 live one so much better. Still, this is good. a country blues as they come.

'Country Honk' must have come as a surprise and a shock to all who listened to the album for the first time. 'Honky Tonk Woman' had been a hit all over the world and on the album is this country something? A great alternative version to the famous rock song and totally convincing. Byron Berlin's fiddle graces the song fully. Jagger puts on his sneer and Keith sings along is his own peculiar way. This version may be seen even sounding as something of a musical joke, it is so much fun. I can almost see these guys laughing out loud in the studio the moment they came up with the idea.

'Live With Me' seems like a straight rocker. But wait. It holds the most memorable bass guitar of the album and it's not Bill Wyman playing but Keith Richard. Leon Russell makes an appearance on this song. The honky tonk piano is his. Bobby Keyes makes his entrance on saxophone. In other words, this song, that is about moving up in the world, holds a few elements that make the song more than interesting. Rock is spat out here by band and guests.

The title song is another song that starts in a country style. Finally Ian Stewart makes an appearance with one of the elements that make the song more than memorable: the piano part. If country rock was not invented at this point in time then this is one of its perfections. Richard-Watts-Wyman make sure the song has this great pace. Stewart and Ry Cooder make it fly. Jagger sings another one of his great songs. 30 and 20 years ago I was always disappointed if the band played 'Gimme Shelter' and not 'Let it Bleed' live. With Ms. Fisher's centre piece that discussion is all over. 'Let It Bleed' is one of my favourite Stones tracks ever, period.

In the 60s there was a serial killer active around Boston who was given the nick name "The Boston strangler". This Albert DeSalvo is sort of the lead character in this song. A blues rocker with great pace and these tempo changes that give it grace and make it magical. How important this album is for the career of the band is shown that this is the fourth song that is still played live regularly and this is only song 5 of 9. Jagger sings at the edge of his vocal reach, but compensates with great harmonica playing.

The Keith song of Let It Bleed is 'You've Got the Silver'. Another country blues staple with a lot of acoustic guitar work. Song 6 on stage in 2013 and 14. Nicky Hopkins plays an organ and piano part that catches the ear. Keith Richard is all over the song, showing what Ry Cooder had taught him in the previous weeks and months. The Stones sucked up all again and turned it into songs others could only have dreamed over dreaming, like 'You've Got the Silver'.

'Monkey Man' is the most mysterious of the songs on Let it Bleed'. Typical Keith riffing, the rapid stop-start playing, it's all there. Nicky Hopkins has an interesting role again. The song starts as if it's 1967 all over. The harsh guitar playing takes us all out from floating away. The mystery returns with the coming of the lead guitar solo.

It all ends with a song that is almost as impressive as 'Sympathy For the Devil'. 'You Can't Always Get What You Want' starts with a classical choir, the London Bach Choir. The members must have been very surprised when asked to sing this (or they never told the conductor who it was for). It graces the choir that they are on the album. Another guest comes in Al Kooper on keyboards and French horn and Charlie's not drumming here. Jimmy Miller is for some reason. Rocky Dijon plays the congas. This is another song that took me a few years to really start appreciating. Nowadays I hear how well this song is played, the choir that graces the song over and over again. Richard's fantastic guitar work. Perfection in other words. The piano notes in the turnaround are so nice. And this is song 6 of nine that are still played often or every show. That makes Let It Bleed the single most popular and important The Rolling Stones record to date.

Closing up. Fabulous album, five stars the whole way, from the most important year in rock. 1969 is seminal for most bands of that era. But Wo., isn't 'Sticky Fingers' being re-released today? I can only answer, be patient my dear readers.

and buy on Bol.com: