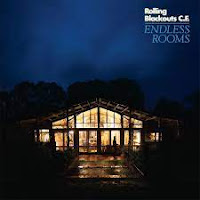 Rolling Blackout Coastal Fever with its previous albums somehow never managed to even kick a dent in my softly molten butter. So how come that Endless Rooms is stuck on repeat in my cd player? A good question, but one I can't answer. Fact is that with this album the band seems to do everything right. Life remains full of surprises and very much worth living.

Endless Rooms starts with a mellow instrumental, as if Rolling Blackout C.F. is warming up and warming me up in the process as well. With 'Tidal River' the fun starts. It is an alternatively rocking song, with more than enough mildly pricking riffs. Not even close to what Holland's newest rock bands are excelling in, no, this is a mix of a prickly riff in combination with a melodic one and a fairly standard rhythm. A quote here "Take your complaint to the United Nations" and a "calling out to Sister Sledge" there. All before a gloriously melodic part comes in. Here's a band that's on a roll, that much is clear. 'Tidal River' combines two worlds and aims for the best combination.

Rolling Blackout Coastal Fever is an Australian band from Melbourne. Five men, three singer-guitarists with bass and drums. This explains some of the many guitar parts I'm hearing on the record. Having formed in 2013, since the band released two EPs and three cds from 2018 onwards. A steady production it is.

With Endless Rooms the band places itself at the end of a long queue of bands that came before in the past 60 years in pop and rock. Bands that excel in combining pop and alternative/indie rock in all the right ways. Listen to the songs, like I'm doing now to 'Caught Low'. The pop element shines, just like it is clear that the band is in a long queue. Don't get me wrong, there's nothing wrong being placed there when songs like the ones on Endless Rooms are concerned. They deserve to be in that spot.

What makes the songs alternative, is that Rolling Blackout Coastal Fever dares to search for the notes that are on the edge of the melody, in the riff as well as well as in solo notes. It is the contrast between the solo notes and the rest of the song that keep my ears on their toes for the whole of the record. Endless Rooms is mildly challenging to listen to but also melodically exactly right because of this mix in the music.

Concluding it has become a question that ought to receive an answer. Is Endless Rooms so much better or did I have poop in my ears when listening in 2018 and 2020? All I can say, is I tried twice with 'Sideways To New Italy' in 2020 and gave up both times after a few songs. So what a pleasant surprise the band's new record is.

You can listen to and order Endless Rooms here: 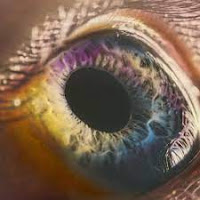 Three more recently released albums that deserve extra attention. All three are among the best in their respective fields, towards really special overall. 2022 is turning into an exceptional year musically, although, of course its true worth can only be ascertained over time. For now, my ears are truly enjoying themselves.

Listening to We for the second time, I decided to order the album immediately. We shows all signs of being a monumental album. 'Everything Now', despite all the critique of being a disco album, went down really well with me. With its second and third album Arcade Fire had totally lost me, only to return gloriously.

We is as monumental as it is timeless. The band embraces everything from The Beatles to today. It bares itself in total vulnerability, yet it is as tough as nails and all without ever not convincing. In 'End Of The Empire (Sagittarius A*) it moves as easily from The Beatles to early 70s David Bowie in ballad mode. Think 'Life On Mars' and songs like it.

Time flies. When the debut album of what I still consider to be a new band approaches its 20th birthday, it is a clear sign that time does pass, fast. The good thing is that age does not determine what is good music. Mindset does. Curiosity does. And when I hear a song like 'The Lightning' explode, I know I'm listening to an ever better album. Not that it's a unique song. The War on Drugs makes dozens of songs like this, but it can't get close to what Arcade Fire is doing here. This is strength, balled energy, purpose and focus all in one.

"No one is perfect", Win Butler sings in 'Unconditional I (Lookout Kid)'. It seems like I have to beg to differ. We is perfect. Arcade Fire has found a strength that I did not see coming. Not just of the powerful (alternative) folkrock it plays, no, We contains an inner strength in combination with a form of lightness that was previously missing. It combines the best, i.e. party element,of 'Everything Now' and all that came before that album. Perhaps 'Everything Zen' was the album that allowed for creating We. Growth is what we call progress like this. 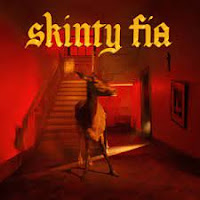 The band moved from Ireland to London and now looks back, with a little homesickness thrown into the mix in the form of more Irishness. Whether the move is responsible for the quality of Skinty Fia is impossible to determine of course. Fact is, Skinty Fia is a definite and positive next step for the band. The lyrics are still depending on the strength of repetition, something more bands are good at in the 20s. Take Porridge Radio or Wet Leg. My personal likeness of Fontaines DC grows per album as well. 'A Hero's Death' did agree with me and Skinty Fia is a no brainer to like. From the very start the album intrigues. 'In Ág Croíthe Go Deo', the opening song, shows such growth, such subtlety and arranging skills. Fontaines DC may have lost its wild hairs here, it has won a tonne of beauty in that process of loss.

There's enough of the "old" Fontaines DC left on its new album, fact is that the band is evolving and letting in other influences. The result is a more diverse album. Singer Grian Chatten's role, always prominent, has become more so. When the band steps back, it all comes down on his vocal skills to impress. Chatten takes the role effortlessly. Of course, he's no Frank Sinatra, he's Grian Chatten and pulls the songs of his band totally towards him, making the whole shine. The band created some very nice arrangements around him, resulting in a wide ranging album, showing more different sides of itself. Skinty Fia seems to be the right step for the band, as it allows it grow. Now and in the future. 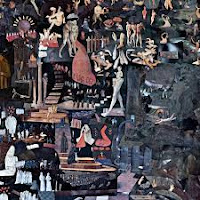 Pornographic Porn Crumpets, from Perth, Australia, are in a hurry it seems. Within a year there's a new album and not one that sounds like it was made in a hurry. Covid may have assisted here, as Australia was long cut of from the rest of the world. With Night Gnomes PPC goes for full frontal attack on the senses of its listeners. The band plays rock but without a doubt psychedelic features are a huge component of its music. Although the band shows a few sides of itself on Night Gnomes, one band springs to mind continuously while listening to the album: Kula Shaker. Drop the overly Indian influences of the band's debut album 'K' and you are left with the fiery rock music it also played. Singer Jack McEwan comes close to Chrispian Mills here alright. PPC is able to lay the same sort of energy into its music and combine it with exciting and good songs. Not everything is played in fifth gear, some songs on Night Gnomes do hold back, but always as a step up to releasing more energy. Comparing the two albums I'm familiar with, the latest issue is a giant step forward. From nice to good with Night Gnomes.

You can listen to and order Skinty Fia here: 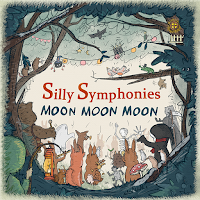 For me at least, things went quiet where Moon Moon Moon was concerned after four posts in 2017. Reviews of 'Help! Help!' and 'Oohohoo' and two live shows. This is about to change, as last month a new album was released, Silly Symphonies, and what an album it is. Speaking of branching out.

The previous Moon Moon Moon albums were the result of Mark Lohmann working on his own in his bedroom, assembling the sounds and music on his laptop. The albums were the modern kind of lo-fi and DYI. It may be that the new album was assembled in the same way, the way it presents itself, is one of a huge production, filled with orchestras and background vocals.

What has not changed, is the sympathetic and small, modest way the album and music present themselves. Listening to the music immediately brings a smile to the listeners face. What jumps out immediately, are the instrumental interludes. As if listening to a Disney movie of old filled with princes and princesses, sprinkled, shiny stardust all around them. Where did the idea to step so far back in time, musically, come from?

The same nostalgic feeling can be found in the other songs as well. Languorous strings weave themselves around and through the songs, that all contain a feeling of longing, perhaps not so much for something lost, more for something that lies in wait, something that still needs to materialise: the future. Moon Moon Moon used influences to up to 90 years ago, to await the future.

With Silly Symphonies Mark Lohmann, in collaboration with Adriaan Pels, has expanded his musical universe tremendously. It moves so wide beyond the two albums that introduced him to me. In fact, it makes him another artist, another band. There are only very small likenesses left. He has even become a different singer. Musically, he (also) refers to albums from the 1970s, with hints to Britpop bands like Supergrass, taking out most electric guitars. Silly Symphonies is all about songs. The joy of writing them, the joy of singing them and the curiosity to find out where the concept of the song can bring him. The latter took Moon Moon Moon a long way. The richness of the arrangements, without ever overdoing it, which would have made the songs sugar-coated, lifts each song to another level, which simply does not compare to the albums of 2017.

Take the song 'Hell'. It starts out very much in kind with Moon Moon Moon's previous work. Small, electronicly compiled and then it branches out, like a flower opening itself to show its full beauty.

Moon Moon Moon may have stepped onto another level, it sits there quite comfortably, with room to grow further in the future. Silly Symphonies came as a nice surprise and kept growing ever since.

You can listen to and order Silly Symphonies here: 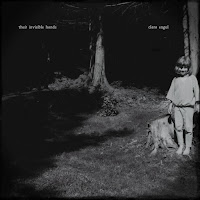