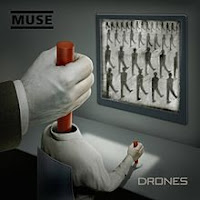 What to say about the new Muse album? It's like a steamroller riding over me, like a sledgehammer to the head or a powerdrill next to my bed early morning while still asleep. Drones is as exciting as 'Showbiz' and 'Origins of Symmetry' were, only better, more consistent, musically so much more developed. In short, Drones is Muse's best album to date.

That about told it all, didn't it? What's left to write? Let's start by taking one step back. The first Muse album reviewed on these pages was previous album 'The 2nd Law', read here: http://wonomagazine.blogspot.nl/2012/09/the-2nd-law-muse.html. Looking back, it was a difficult album that I did not look back at very often. The album contained some good songs, but as a whole the band tried to be more or do more than was good for it. In interviews the band already announced that it went back to days of old. And I can hear it too. This is not just a band saying something obligatory fans like to hear, it's totally true to its words.

For one, Muse threw overboard all restraints and lets the killer riffs fly around my ears as if they have to win the Riff de France today. The interaction between Matthew Bellamy's voice and guitar is as strong as ever. Muse's strongpoint of course is that the band manages to combine metal with pop and Queen. On Drones that comes forward in the strongest way possible. There is a total balance between the three elements. The sound may be metal, melody is what Muse is all about. The band delivers as all songs are singable, moshpit prone and rhythmically extremely strong. The way the three musicians interact is fabulous. Howard and Wolstenholme lay this foundation that is a mix of pure power and suppleness. Bellamy often joins them in the riffs. From that moment on all is possible in the music of Muse. Fire alarms, speeches, John F. Kennedy? It's all there on Drones.

In that way Muse comes close to the loud side of Pink Floyd on 'The Wall'. A great, loud riff, voices in the background and a main story, in this case about the use of Drones and what this does to the main character of the album. The similarity stops there, but that Muse has heard 'In the Flesh' is obvious. The singing and especially the harmonies are a copy of Queen. The voices shoot up an octave or two it seems. Just as some guitar lines, e.g. in 'Defector', are classic Brian May. Matthew Bellamy infuses this influences into his and Muse's sound, making them an integral part of what Muse is. Almost 16 years after 'Showbiz' it is easy to say that Muse has a sound of its own.

The start of this album is so self confident. Which band hoping/expecting a new major hits album, starts it with shout singing "Dead inside"? A death metal band perhaps, not a band like Muse, you'd expect. Still Muse does and sets the stage for an album that tackles some great issues like war as a video game. The detachment of the drone pilot and the effect of his work on himself. The relation of man to machine, something that will become more important in the next ten year.

Under all that verbal violence, like the '[Drill Sergeant]' and the inner fight of the main character Muse does what it does best, rocking out. Riffing. Singing great melodies, creating these perfect changes, even if they resemble what we've heard before, 'Psycho' has a familiar sounding change e.g., they are at the top of what Muse can do. The good thing about Drones is that Muse lets all the reigns go, so that its killer riffs fly. Something that at times they did not do enough on the previous albums. It just all adds up on Drones.

Muse is the only band I truly like that I've never seen live. It's time to change that in the near future somewhere. It will be 2016 looking at the tour schedule. Until then Drones is the next best thing. Great album by a great and very inventive band.

You can listen to 'Dead inside' here: