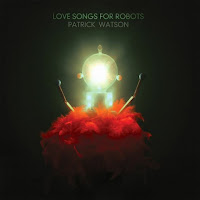 Not so long ago I visited Geneva for a conference, walking the streets from my hotel, over the outer bridge at the end of the lake, defying the strong winds blowing into town over Lac Léman, so hard that the famous Jet d'Eau was either switched off or had broken down. During these daily walks I had a new album on, that I hadn't heard before, by an artist that I had never particularly liked before: Patrick Watson. Everytime the album was finished I clicked it on again, at least four times in a row and ... on coming back home I sort of forgot about the experience. As if what happened in Geneva had to stay in Geneva. It's time to make amends.

How incredibly aptly Love Songs For Robots is titled from a the sign of times point of view. Robotification is a word that pops up more and more recently. Doomsday scenarios as well as dreams of all the work one can do if only the car drove itself, the vacuum cleaner attends to the chores, etc. If the latter scenario plays out we may all be singing love songs for robots soon. If it's the former we'll be forced to sing them to them as if they are Kim Yong-un or any other dictator yearning for love. Or simply sing 'This Is Not a Love Song' or 'I'm Writing You a Hate Song'.

Patrick Watson has made love songs that may be loved by robots. His songs seem to distance themselves from true emotions. They are of a fleeting kind as if robots wrote them and emulate love as they are programmed to understand this emotion/state of mind. Somewhere true warmth was replaced by a synthetic version. It's warm, but I am certainly missing something, but are fascinated, utterly fascinated by Love Songs For Robots. Watson comes close to the atmosphere that Sophie Hunger created on her last album 'Supermoon'. With the difference in the warmth. Alt-J is moving around also, in his high voiced singing and the synthetic elements in his songs. Again, I'm fascinated. The emotions hide in the layers somewhere in between and in some moments it all just spurts out. Like in 'Bollywood'!

Listening to Love Songs For Robots again, I'm getting more and more convinced that this is an album to have on vinyl. The sort of total musical experience. Somehow when I have a record on vinyl I take my time to listen and truly immerse myself in music. Playing it louder and let myself be wrapped up in it. Just like a long time ago.

Patrick Watson caught a 10s virus of some kind as I'm hearing music that I simply can't remember him making before. When I'm fair I add that I can't remember myself listening to this sort of music before 2014, before I bought the last Alt-J album this winter on a whim and got totally caught up in it, playing it every night for weeks. Enters Geneva in May.

Let's take 'Good Morning Mr. Wolf' as an example. There is this very mystical layer underneath everything. A beautiful main melody on a guitar with some effect or other on it. Patrick Watson singing high. There are (synthetic?) strings, a piano and it just doesn't get more beautiful than that. 'Good Morning Mr. Wolf' is all atmosphere, while on top of that or up, over or through it, these beautiful melodies are woven, while in essence nothing spectacular seems to be going on. So what is it that makes me so attracted to this song? It has to do with the mystery, but that just doesn't tell the story. Who cares about mystery in a song, if it isn't good? No one, right? I just can't provide an answer here.

To try and start an explanation I start with the mix of the synthetic mystery mixed with the acoustic instruments. This happens in a total organic way. You can find this in 'Heart', where the acoustic guitar plays over the synthetic, atmospheric stuff. At the same time the rhythm is played with by the band, changing the mood of 'Heart' the whole time. Creating something that could be called prog rock if it were not that the music has nothing to do with it. Arcade Fire comes closer here, especially when the high female voice sets in near the end. Oh, yes, I'm intrigued.

Comes in 'Grace'. Blur anyone? The sound comes close to what Blur does on its new album, 'The Magic Whip'. The albums were released close together, so that is a coincidence, but there's Blur spelled all over 'Grace'. It has this relaxed mood, but also holds some weird, almost psychedelic outings on guitars with effects. Another nice song, with estranging elements.

Love Songs For Robots continues in this way and never gives my ears the chance to escape for one minute. I'm intrigued, fascinated and totally happy with this album from an artist that I never heard much in to date, no matter how much Hans, formally from the Q-Bus raved on about Patrick Watson seven or so years ago. For all I know, he even had him on stage in Q-Bus, Leiden at the time. Without me that was.

Song on Love Songs For Robots may become even a little jazzy or Beatlely, that mystic something in the background is never far away, pulling me in, all the way, until there's no return.

You can listen to 'Places You Will Go' here: