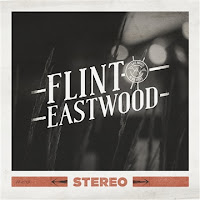 Time for another Noisetrade album. The grand niece and nephews of Clint are making music out of Detroit and like the old master do not mind to mix a genre or two or three on its record. Flint Eastwood is on Noisetrade with this EP, but for the rest it is very hard to find information on this act, beyond some pictures on its website. The music speaks sort of for itself though.

The music is a mix of dance, rock, some EDM elements, melodies in the vocals I really like. So let's say Garbage, EMF, that sort of music. It rocks, it's danceable and Flint Eastwood doesn't mind mixing in some 80s synths and Giorgio Moroder pulses. as well. A mix that simply is appealing as it holds all the right elements to make it a winning combination.

The only real message the band gives off is something about loving spaghetti westerns. In the most dancy song, 'Billy the Kid', this comes forward most as the lead guitar has this western twang. While the music pulses as if a 40.000 something crowd at some dance festival needs conquering, the guitar plays out as if in the finale of 'The Good, the Bad and the Ugly'. An almost impossible combination, but Flint Eastwood easily gets away with it.

'Can You Feel Me Now' does the same. Dance, rock, twang and a fun melody. The loudest song is the one that closes it all, 'Shotgun'. The more metal side of the band won out here. The guitars rock out in loud riffs. The louder side of Courtney Barnett, Sia and Torres (review will follow soon), is coming out here also. It is opening song 'Secretary', that lyrically is the most militant and accusing. "Boy I am not your secretary" or "I am not your dog, so quit bitching" sings the, for now, nameless lady singer. Some nice riffs are played and a 60s, early 70s sounding Moog, that has nothing to do with the more modern music. It's the mix that works.

Only four songs there are on Last Night in Bolo Ties. Four in ways different songs, but there's is a communality that binds. Rhythms, voices and the kind of melodies that work, so stick.

I haven't got a clue whether Flint Eastwood is still among us, Clint is going to shoot a new movie soon, so I read today. Unfortunately that is what we have to make do with where Flint is concerned for now. In the meantime enjoy Last Night in Bolo Ties.

You can listen to and download Flint Eastwood on Noisetrade: