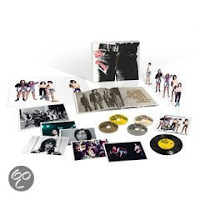 Yesterday, coincidentally, I watched 'Gimme Shelter' again, that epic movie shot during the 1969 U.S. fall tour, including the mixing of 'Get Your Ya-Ya's Out' and the first recordings for what was to become 'Sticky Fingers'. During the tour The Rolling Stones stopped over at that near shack called 'The Muscle Shoals sound studio' and recorded first sessions there, including the 1971 #1 hit 'Brown Sugar'. That is over 1 1/2 year before release. You can also see Mick Jagger playing the song on Ike Turner's guitar to Ike & Tina in some dressing room. If you look closely you can see Ike's surprise: What is this honky singing?, his face seems to say.

(Yesterday is such a strange term. Yesterday we published the review of 'Let It Bleed'. While the Stones tour a continent away WoNo Magazine honours the band with two reviews in two days.)

I remember buying 'Sticky Fingers' in 1979 or 80 and playing it for the first time in the house of our neighbours as the whole family was sitting there when I got home from town with my new records. What do I think of the album in 2015?

First off, 'Sticky Fingers' is one of the four albums that are deemed the band's best, released between 1968 and 1972: 'Beggar's Banquet' (1968), 'Let it Bleed' (1969) and 'Exile On Main Street' (1972) make up the other three. Together it's songs are the mainstay of every show the band plays to date. There's no denying here, although I tend to have 'Black and Blue; 'Some Girls' and 'Tattoo You' high up there as well. That may have to do with my age, as I consciously lived through those releases, which was not the case with the "holy 4". Jimmy Miller was on producing duties again. In hindsight it's easy to conclude that he made the Stones so much more focused on their work. That aside, let's go into the music.

Sticky Fingers kicks off with the single, 'Brown Sugar'. This raucous rocker holds it all. Great pace, shocking lyrics, great guitar riffs, a honking saxophone, Bobby Keyes! (How wrong a family name can be), and piano by late, great Ian Stewart. 'Brown Sugar' is the Stones at the top of its rock game. Where many songs after 'Brown Sugar' in the same vein became a formula, some great, some less so, this is the very real thing. The song is dirty, sleazy, from the other side of the tracks. Whatever the lyrics really are about, at face value Mick Jagger seems to have found a dirty story to tell about slave ships, human trafficking and whatever else. It all kicks of with that killer riff, that is responded to by some guitar notes. Call - response. The song is riddled by all these extra and minus notes around a basic chord, given the song its distinctive sound. Timing between Richard and Taylor is impeccable. True weaving on the alternated accents in the beat.

'Sway' is the next song that is a total success as far as I'm concerned. Somewhat un-Stones like. The tempo is brought down. The guitar sound is not. In comes the piano, that really embellishes the song, as does the slide guitar. Jagger's song is too thin for a power ballad like 'Sway' is, but he gets away with it easily. His trick is to add this little vocal touch, a hint of the ordinary in his accent. Which makes it all alright, despite the fact that he's singing on the edge of his capability here. Near the end Mick Taylor goes off into the stratosphere, lifting 'Sway' even higher. Great song.

'Wild Horses' is the third song that is fantastic. This ballad is close to perfection. With the flageolet accents on the guitar and the stop start chord changes the song starts with just guitars and voice. There are guitars everywhere. At least four in the intro. Jagger is doing one of his best vocal performances ever here. If you look at 'Gimme Shelter' you can see Keith Richard enamoured with his own creation. Eyes closed, lying on the floor of the studio just listening to the song. Totally satisfied with the music the band recorded. 'Wild Horses' is total beauty.

'Can You Hear Me Knocking' is one of the songs that I did not like 35 years ago. 'Bitch' and 'Moonlight Mile' being the other two. For the former song this has certainly changed over time. The somewhat jazzy stuff did not land with me then, at all. In 2015 I can hear what the band is trying to do and it gets the job done in an adequate way. The somewhat hesitant riff is almost boring, but then I hear how the two guitars are bouncing off each other and I change my opinion somewhat. The transition into the chorus is fabulous. The warm organ that kicks in in the background works really well. Richard's background vocals are still memorable. Lifting the song up. Let's skip the end. Still not my favourite, but I can easily live with it today. It's just not The Stones, it's Traffic. On an aside, Billy Preston makes his entrance here on organ, thus having his moment of fame as the man who played on record with The Beatles and The Stones.

'You Got To Move' has a better version of course on 'Love You Live'. This country blues version is also very well done. Following on 'Love In Vain' the Rolling Stones do a second country blues cover and do so really well. Dirty, tail draggin', mud slimin'. Slide on a national steel or dobro with Jagger putting on his sleaze voice and Keith singing along in the background. Charlie Watt's kick drum makes it all perfect.

'Bitch' I learned to live with in the past decades, but I do not need another 'Live With Me'. For the rest, it's sort of o.k. and the horns are just fine. The "Yeah, when you call my name ..." sequence is the best part of the song.

For some more electric blues in the extremely slow segment there is 'Love in Vain' live and there is 'I Got the Blues'. Man, what a song. Keith is plucking away here in his characteristic way. A few extra notes here and there. Then there are the horns chiming in on the misery all around. When the organ solo comes in it's clear nothing will ever be right again in this song. (Jagger was getting married in 1971, wasn't he?) The ending is a bit different, if not daft, but o.k., we already had the world. So, we can't complain can we?

Mick Jagger had to own up decades later that several of the lyrics of 'Sister Morphine' weren't his. Marianne Faithfull's pension plan was settled from then on, I suppose. Again the Stones top everything here. A scary trip in a hospital ward is echoed by the slide guitar, that's Ry Cooder again and the dark sounding acoustic guitar and piano notes that were recorded as if they were recorded in a swimming pool. Why not? When finally the full band kicks in the mood is dark, despondent and without hope. One of the better Rolling Stones ballads to this day. No questions about it.

My favourite country song? That one is so easy: 'Dead Flowers'. The Stones can lay down a great country rocking song with the best of them. There are no other words necessary. It works, with its rolling piano, slide guitar and all the rest, including Jagger's darker tone and Watts' joke just before the end. See if you can find it. Again Ian Stewart's contribution is a very nice one. He picked his songs to play on, so we are told and nearly all are excellent choices.

And 'Moonlight Mile'? I do not need to have an opinion on everything, let's leave it at that. Dreamy, spacey, four years too late. And then, another song popped into my head. '100 Years Ago' from 'Goats Head Soup'. That made me get a different perspective in 'Moonlight Mile' just now, so who knows what I'll write ten years from now?

There are extended versions with extras. What I've read so far not so much new songs as with 'Exile On Main Street' and 'Some Girls' but a lot of alternative takes of songs. The one of 'Brown Sugar' below is nothing to be ashamed of. It was on the radio on the day of writing and sounded totally spectacular for many reasons. Better than the original? Hell, yes! The surprise that this is possible is so huge!

I decided to just do a reassessment of the original album. It is nearly flawless, with a few dips, for the rest totally tops and one of the reasons I became an ever bigger fan of The Rolling Stones from 1978-79 onwards.

You can buy this release as cheap or expensive as you like. I would not be surprised if you would find a version with a gilded zipper for the really top end of the market. Below is the most expanded and expensive version I could find. The regular album is a lot cheaper though.

You can listen to 'Brown Sugar' with Eric Clapton and Al Kooper here: