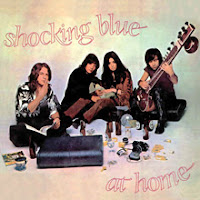 Another Dutch band in the series on albums from 1968-69. Bands that I knew the singles of at the time, but albums were an unknown phenomenon to me. And if I ever ran into one at the time, they were mostly boring, because I didn't know the songs. For over a year I'm changing that, so after The Cats, Tee Set, it's time for Shocking Blue. Internationally you can find acts like Barry Ryan, Blood, Sweat & Tears and Donovan.

Shocking Blue was an extremely famous band, to me, early in 1969. What did I know that 'Send Me a Postcard' was the band's second (charting) single and the first with the incredibly sexy Mariska Veres? That was followed by the equally exciting single 'Long and Lonesome Road' that was followed by the at the time to my ears a bit disappointing 'Venus'. That single did not hold the excitement of the other two singles. Of course 'Venus' is the song that made Robbie van Leeuwen a multi-millionaire. One of the classic rock/pop songs of the era.

Robbie van Leeuwen already had a lot of hit singles to his name with The Motions. He left the band in 1967 to start Shocking Blue. The band scored a hit in the fall of 1968 with 'Lucy Brown is Back in Town'. It wasn't until Mariska Veres joined Van Leeuwen, Klaasje van der Wal (bass) and Cor van Beek (drums) that the band really went somewhere. At Home is the first album of the band with Veres and contains the second two singles. The Nirvana cover 'Love Buzz' stems from At Home as well. I found out that the singles were added later to the cd version of the album.

The first thing I notice with my 2015 ears is the "hippie" influence. A sitar is droning away here and there, but it goes beyond just that. It is a part of Shocking Blue's music and no longer an experiment, like with The Beatles and The Stones in 1967. Something glued on top or plain experimental. Jefferson Airplane is all around. A band that hadn't charted in NL yet in 1969. That would have to wait for another year. The guitar lines of Jorma Kaukonen can be found by those who know on At Home. The Marty Balin/Grace Slick vocals are there, but definitely less prominent.

Strangely enough several of the songs sound somewhat familiar to me, while I'm fairly certain that I have never heard At Home as such before. Putting that aside, what I also think to hear is the excitement that this album must have caused in 1969. Shocking Blue is good and it is no surprise that many people recognised this in several countries. In fact it would never be this good again. With the exception of 'Never Marry a Railroad Man' the band would never reach this level of quality and popularity again.

The album starts with the modestly rocking 'Boll Weevil', one of the songs I seem to know. I faintly start to remember that I must once have owned a cassette tape. A long, long time ago. 'Boll Weevil' starts out as an instrumental. A kind of pop song with fast chord changes, creating a riff. The U.S. influence is totally obvious. Shocking Blue rocks out in a Chuck Berry kind of way. The song holds an organ and a piano, but I can't find anywhere who plays the instruments. So, if anybody knows, let us know. For a band without a keyboard player, there are loads of keys on this album. Even with more than distinctive parts.

The most surprising thing I noticed when reading up on the album, is that I had never heard the similarity between 'Oh, Susannah' and 'Venus'. Now I had never heard The Big 3's version called 'The Banjo Song' before, but the way the central riff is there and even the "aah aah aah aah" part, it becomes near embarrassing. Tim Rose was a very unlucky man. (That Mama Cass sang in the same The Big 3 was also a surprise.) When all is said and done, like Rose made an existing song into something new, Van Leeuwen in the end did also. It must have been "The Godness on a mountaintop". And who was first 'Pinball Wizard' or 'Venus' with the intro? Robbie van Leeuwen seems to be an attentive listener, who can then create something uniquely his.

At Home holds more great songs though. 'Love Machine' is a rocking song. 'California Here I Come' is good. The Kaukonen connection is strongest here. The solo is totally Jorma. 'Love Buzz' is almost troubling in the mood it sets. 'I'm a woman' determined the first part of the career of that other Dutch band with a stunning front lady at the time, that broke late in 1969 with 'Seasons': Earth & Fire. 'I'm a woman' is a curious mix of an Indian sound and a brooding rock song. Veres' performance is strong here. She really is fronting Shocking Blue here. I can't tell what she was capable of live at the time. On album it seems as if she'd done nothing else before At Home than front a band and record songs.

In the end it really doesn't matter that her/the English is not exactly perfect. There's a hint of an accent and some parts of the lyrics are not really English. The melody and the performance take care of that. Shocking Blue was a stunning band at the time and had the looks of Mariska Veres. Where to start telling that I thought her so pretty when I was a kid, discovering looks and girls as something really different from boys. It may be in hindsight that Shocking Blue was not so original, but compensated that fact with all else.

And then 'Long and Lonesome Road' comes by again. Boy, do I love this song. I still think it so much better than 'Venus'. It rocks, it has this distorted guitar, Mariska Veres's singing like there's no tomorrow and this warm organ. 46 years down the road it is still probably the song I like best by Shocking Blue.

Summing up, 'At Home' is so much better than I ever expected. It seems like I had a copy once, that certainly had another name, without the two singles on it. Shocking Blue captured its sound in an aggressive, but great way. At Home is a monument of Dutch 60s pop/rock music.

You can listen to 'Long and Lonesome Road' here: