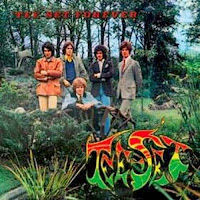 In his quest for albums of 1968 and 1969 Wo. discovers the albums by some Dutch bands as well. After The Cats it's the turn of Tee Set who in the first chartlist he owned in that October of 1968 charted with one its average hits, 'This rose in my hand'. In this series you can also find reviews of the likes of Donovan, Barry Ryan, Blood, Sweat & Tears, The Cats, etc.

Tee Set is a band that I had nearly forgotten about. In my early youth the band scored many hits and were one of my favourite bands. 'Tea is Famous', 'Ma Belle Amie', 'She Likes Weeds', all were huge hits. One of the first albums that I owned was a compilation album with the band's hits. Having said that, I do not own a single album by the band and a few later singles. Reaching puberty the band was basically something of the past and not something to be proud of to have liked. So does listening to an album in 2015 change my mind in any way?

Tee Set was a band from Delft, formed in 1965. From 1966 onwards the band became a regular in the Top 40 for almost a decade. The main stay through the whole of its career is singer Peter Tetteroo, who released one of the singles on Forever as a solo single. 'Red Red Wine' was another of the big hits. (Yes, that 'Red Red Wine'.) Who played in the band at the time of recording, I can't really tell.  All other first incarnation members had left Tee Set over a royalty fight with the manager to form After Tea in 1967. So the other two more famous band members Hans van Eijk and Polle Eduard were not in the band at this point in time. It seems like the following gentlemen play in Tee Set at the time: Franklin Madjid (bass), Joop Blom (drums) and Ferdi Karmelk (guitar). Finally Jan-Pieter Boekhoorn joined to play keyboards. Karmelk circa a decade later died tragically of an overdose and was Nina Hagen partner at that time. 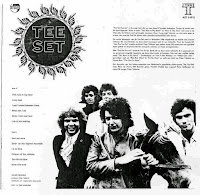 A few things fall on more experienced ears straight away. Peter Tetteroo loves to sing in a rhythm & blues way. Not as fierce as the competition, i.e. Theo van Es of The Shoes, but clearly he lays this rasp into his voice. 'What Can I Do' is Four Tops the whole of the way. Psychedelia has not totally left the sound of Tee Set, if not the looks as the cover shows, but the transition to a pop band is in full swing. Pop elements are all around. Finally there certainly are a few pleasant surprises a well. 'Sittin' on the Highest Mountain' is a Nederbiet pop gem with horns and all. The song rocks in an extremely pleasant way and allows some faint hints of Motown as well. Another surprise is a cover of 'If I Only Had Time', John Rowles' hit in the spring of 1968. Under the title 'Id No Time' Tee Set turned it into a song in memory of Dr. Martin Luther King. Not my cup of tea though, these softly played violins and acoustic guitars.

Two other bands that Tee Set certainly listened to is Spencer Davies Group and Traffic. 'Colours of the Rainbow' holds all that. Steve Winwood's voice and Chris Wood's frantic flute playing. Tee Set was not afraid to copy what it liked it seems. 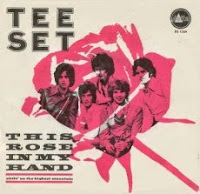 'This Rose In My Hand' the single this story starts with is a lightweight of a song with a characteristic honky tonk piano, banjo, fiddle, harmonica and double tracked vocals. You'd almost conclude it is a country song, but that is not totally true. It is totally correct that the song didn't grow into a top 10 hit. In general Tee Set is more a top 20 band than a Top 10 band. The second song, 'Long Ago', I'm sure I know, but was not a single. One of the better songs on Forever by the way. Up beat, sprightly and a fun beat song.

The third song is called 'I Won't Stand Between Them'. In 1970 Bonnie St. Claire scored a huge hit with a song with the same title. If I'm correct a composition of Peter Koelewijn. (Some googling proves me right. And, believe it or not, Bonnie St. Claire's version is so much better. Monumental in an extremely kitschy way.) So Tee Set recorded this song a circa two years earlier. It's version has a harpsichord sound and an organ for distinction.

That is about all I can make of Forever. Tee Set is a pop band, without great distinctions like e.g. The Hollies had at the same time. Now that is an idea. The album with "Listen To Me' on it. I can't promise that I will often return to 'Forever', but yes listening to the album was fun while it lasted.

You can listen to 'This Rose In My Hand' here:

There's not a single album by Tee Set on sale on Bol.com. Seriously out of print this band is.
Gepost door Wo. op 10:18