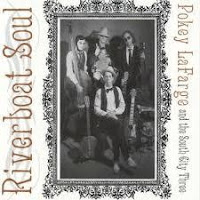 Whoa, what an experience. A crowd-packed Q-Bus hollering and howling, imitating an American bar somewhere in the mid-west any time around 1935. If there's a band playing out-modish songs in 2012 it's Pokey and his three companions. Music like this can only be heard on old 78's with loads of scratches on it or a cd with the same scratches and on Bob Dylan's theme time radio. It's a little blues, jazz, country and I don't know what old.americana from before 1940, but what's clear is the energy and plain old fun of playing that shines through. There's only one song I can think of that scored a hit in the past 40 years based on this sort of music: Vaya Con Dios' 'Nah-neh-nah'.

Last year I had a listen to 'Riverboat soul', an award winning album by the way, for about six songs. Maybe I wasn't in the mood, because I never looked back at it and for that reason was not one of the 30 people in the Q-Bus last year. In 2012 I was one of 200 something. Basically the band packed me in in the first song, as what they were doing on stage was tight, inviting and great fun. Adam Hoskins plays virtuoso solos on his guitar, Joey Glynn stand up bass, Ryan Koenig everything else, like washboard, snare drum and mostly harmonica. Pokey sings lead, blows the kazoo, but mostly plays rhythm guitar. On the side he carries off a mean solo himself as well. All four harmonise adding extra flavour to the songs. Pokey totally makes the picture also. It proves that a haircut and a garment from another age sets someone in another age and time. It's obviously not the people who change. The two guitars on stage give a look like they were among the first electrically charged ever as well. I'll say it here to not create any misunderstanding: I was wrong not listening again to 'Riverboat soul'.

Who can I compare them to? The closest I can get is The Hackensaw Boys, but they are more in the bluegrass side of the spectrum (with some major tempo injections) and at their most bluesy Hot Tuna on their first, acoustic live album. Definitely Django Reinhardt, and other musicians that Bob Dylan listened to late at night in his bed as a teenager in Hibbing, Minnesota, in the 1950s, that set him on route to make music himself and led to his first album, 'Bob Dylan'.

So, despite all my reservations before the concert started, I had a great time with Pokey Lafarge & the South City Three. They understand that in order to turn a concert into an experience, it takes more than just playing music. They interact with the audience, make them a part of the show by inviting them to scream and holler and most of all show that they are having fun as well in playing this music. They managed to have the whole venue enjoy something that is totally anachronistic, but full of warmth and merit. By playing a variety of styles, mostly in an uptempo form my interest never wavered for a second. Plain sheer great fun! If Pokey Lafarge & the South City Three are ever near your town, I wouldn't hesitate to check them out if I were you.

There's also an interview with Pokey on the blog. Click here.