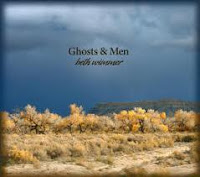 It was on a Friday night in Leiden and just because my friends could not decide on our monthly movie, we ended up in Leiden's House of Music, the Q-Bus. On stage, opening act, American singer-songwriter Beth Wimmer, presently living in Switzerland. As I already wrote for this blog, I liked the show and wound up buying the album. And tell you what, I found myself genuinely liking it. This is not standard practice after listening to guitar playing singer-songwriters' album once I'm home. Not so with Beth. She's in fairly heavy rotation in my cd player.

It's not that the album is highly original or exceptionally special, no, it's because of the warmth of her voice and the at times intricate playing drawing me ever closer into the songs. This is the secret key leading to the quality of Ghosts & men. What surprised me somewhat is the lightness and playfullness of the music on most songs on this album, after all the fairly serious subjects that she spoke of and sang about on stage. The warmth of a Hammond, the clarity of the acoustic guitar, a slide kicking in in the back ground and a beautiful piano sound that accompany lyrics about the suicide of a friend, a break up, but also of new found love. It is clear that the lyrics come from places very near to Beth Wimmer. Whether sadness or joy, we are allowed to share her moods, but on the whole it is clearly about hope, for all of us. She seems at one stage surprised, but embraces her luck fully, as she sings quite explicitly in 'Makin' war', which is, believe it or not, a song about wanting to make love.

To compare this album doesn't do right to its quality, but helps the reader. I'll start with Lucinda Williams, where Beth has the better voice, Lucinda the extra layer of emotions. There's some Joni Mitchell in there, like in 'My babe'. Sheryl Crow, definitely, but Beth has the better songs.

She surprised me with a cover. The album doesn't need it, but she pulls 'Bad moon rising' apart and gives it a haunting quality, which CCR didn't really do. The album ends on a very optimistic note with the, well almost, joyfully upbeat 'For the living'. Slightly out of style with the rest of the album, but a great ending of Ghosts & Men. It's almost an up tempo ska song, which the album needed after the darkness laden 'Damn angel' preceding it. It's so dark and still so intensely beautiful. If anything this song brings her picture on the cover to mind, the intense play of light before a storm. She captured that beautifully.

Beth Wimmer made the album with producer/musician Damiano Della Torre who played most of the instruments with the exception of the percussion. It's Beth's album in every way, but Della Torre put his stamp on the songs and together they've created one of the most pleasant albums I've listened to lately. Her songs are captured like the cover photograph, nigh on perfect. I'm hard pressed for any critique to be honest. If I have to mention anything, I would have left out the sax in 'Damn angel' and put in a Hammond solo instead. That is all.

And then to realise that I would never had heard it if an agreed upon film had played in town. Like Beth seems to suggest on this album, happiness can be just around the corner if you keep your eyes open for it. Was I glad to look around that corner that night!

You can listen to the album and even better, buy it on her website.

Would you like to contribute to WoNoBlog? You can. Leave a reaction behind and we'll contact you.