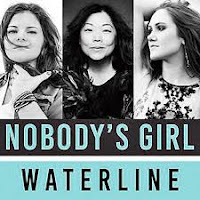 Through the years Hans of the Q-Bus in Leiden has staged many artists in the Americana corner of music in, of course, Q-Bus but also in an old school building in Warmond. In the former I saw Rebecca Loebe play (at least once), in the latter I saw Betty Soo. The common denominator, Amanda Pearcy, is not a member of a new all ladies Americana power trio. Loebe and Sue are joined by Grace Pettis, who I have not encountered as far as I am aware.

The trio from Austin releases a mini album and embarks on a tour of Europe in April. All the more reason to dedicate some space to Nobody's Girl on this blog.

What got to me first is the huge sound of Waterline. A huge surprise and nothing like I expected. The album kicks off with a rocking kind of song called 'What I'll Do'. The ladies make a distinct statement: Here we are and are not holding back. Three layered harmonies, the singing of choice on this album and a huge part of its success, are intense and direct. The voices of Loebe, Pettis and Soo are all over me and do not leave me behind until the very last notes of the album. The title song is another absolute winner. The bluesy, jazzy 'Queen City' reminds of The Secret Sisters. 'Blue Bonnet' is a ballad and probably the most traditional in sound. It is here I'm reminded of Amanda Pearcy, so the circle of this post is rounded, I'm glad to write.

The album contains one cover, 'Call Me' of Blondie fame. Despite the fact that Blondie did a Giorgio Moroder disco track at the time, I always thought it extremely good. This fact is underscored by how good it sounds in the version of Nobody's Girl. Rocking in a mild way it comes across totally. A good song is a good song. A surprising choice it is though.

The bonus track on Waterline is probably a disclosure of what audiences can expect during the tour. Three strong voices and an acoustic guitar. The acoustic version of 'What I'll Do' knows a strong vocal performance, laying bare the essence of the song. The contrast with the power in the music in the opening song could hardly be any larger.

Yes, this is very American music. It is part of a long string of U.S. musicians from the mid 70s onwards. So, yes, granted, it does not exactly colour outside of the firmly set lines. But when the colours within those lines are as beautiful as these, who can complain? What takes me in, as not all the artists in this long string have done in the past, is the combination of the great rocking music and the full-blown vocals in many of the songs. The melodies do the rest. Where the album succeeds is the edge the music contains, a little raunchy in sound, in contrast with the sweet sounding vocals, kicking up a storm when necessary.

The final comment is the fact that the songs between them sound very differently and have a different approach, most likely underscoring the individual singer behind the trio form. Especially Rebecca Loebe surprises me most here. She stands her ground in a band setting easily. All songs have a firm ground of bass and drums and go from there whether more delicate or in full blown rock. They all sound so well. A thing not so strange reading that the backing band played with a host of U.S. rockers through the years. Where the storm resides, the songs are simply so good, like 'Blue Bonnets' and 'Riding Out The Storm'.

A new trio with veterans of the Austin Americana circuit begs attention and deservedly so. It would surprise me tremendously if the shows this month will not prove to be a whooping success. There's a list below should you care to go.

You can buy the album here: