King Time. The Man From Managra 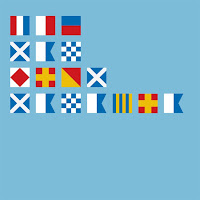 Again an album from Greece reached me via cyberoptics. Within seconds I was able to listen to King Time and again I was surprised by the quality of an album released by Inner Ear Records. How is it possible that none of this music can be heard over here on a regular basis? All I can do is throw in my effort. So here I go.

The Man From Managra? That suggests a location, but turns out it's based on fantasy. An island in the Mediterranean or Indian Ocean swallowed by the sea after a volcanic eruption, leaving just the man? Yes, sure. Mangara is the title of a Doctor Who novel though I found. So like The Tallest Man On Earth is not, Coti K. is not from Managra.

Coti K. is the musician behind King Time. Other musicians played on the album as well. Panos Galanis (drums), Rena Rasouli (backing vocals), Lambrini Grigoriadou (fifth bass and tenor guitar) and Thaleia Ioannidou (trumpet). Together with Σtella he sings 'Tonight', one of the finer songs of the album. King Time is the third album by The Man From Managra after the self-title debut in 2014 and 'Half A Century Sun' from 2017.

King Time is an album that intrigued me from the very first seconds. Somehow The Man From Managra manages to manoeuvre through the light while obviously moving through darkness. King Time is not so much an unhappy album, as a serious one. The lyrics are the reflection of a search for truth and knowledge and the music underscores this quest. It is here that King Time becomes so interesting as the music is allowed to go off into different directions, making the album, within limits, varied.

Where some songs underscore the dreamy way of singing by both Coti K. and Rena Rasouli, others are more direct or fit into a singer-songwriter category. 'Set Sail' starts with a sole keyboard yet slowly progresses into a dark pop song. Where the start is ordinary, the way 'Set Sail' is worked out sets it apart from the many. It is this sort of arrangements that won me over for The Man From Managra. Next to that laidback way of singing. Coti K. does not have an exceptional voice but knows just how to use it perfectly and to boost it through the dreamy backing vocals of Rasouli. By singing this way voice and music become more one and provide each other strength.

The album starts as simple as 'Set Sail' does further on. Just an electric guitar over which Coti K. sings. Rasouli enters for some doo-wah-diddies and there's a song that starts meandering away from its simple origins within the minute. Slowly the song keeps changing, e.g. through the directness when the drums enter. The doo-doo part works here too. Such a pleasant opener 'Sing Your Heart Out' is.

If there is an overall influence in King Time I have a hard time pinpointing it. There is, in Coti K.'s voice and way of singing. It takes me back to the 80s. The music does not. The trumpet intro to the second song, 'In The Light Of Things', is all but glum. It shows how The Man From Mangara is able to let light enter his song, not unlike the trumpet in 'Torch', my favourite Soft Cell song.

Move deeper into King Time, passed the beautiful 'Tonight', and you will find that The Man From Managra does not falter and keeps up the quality he starts out with, surprising with the changes in the arrangements and instruments. A minor change already works like a miracle on King Time.

You can buy King Time here: