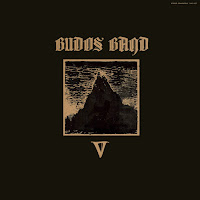 Something new on WoNoBlog. Today a few short messages will be shared about albums that did not make it into a full length review, but deserve some words.

The second album this year named V on WoNoBlog. After the Norwegian psychprog rockers Spidergawd it is time for Budos Band. The band exists for 20 years and with V releases its first album in five years; not surprisingly its fifth. Fully instrumental with a lot of brass, full-sounding drums and classic rock guitars. Due to the lack of singing it is incomparable to Chicago Transit Authority and Blood, Sweat and Tears who both had a great singer or like Chicago singers. But without any overdue pressing that are the bands I would mention as references. Budos Band has that exact same power in it, with a hint at jazz because of the horn arrangements, and rock because of the solid rock foundation. Because the horns are the lead instruments all comparisons stop there. Also because Budos Band shows some restraint in the arrangements, where Chicago TA in some instances completely dived of a cliff, nose first. It makes Budos Band its own powerful self. Something quite different from what can normally be found on these pages, but fans of Dutch instrumental bands Gallowstreet and Jungle By Night ought to find something of their liking here as should fans of the late 60 and early 70s jazz rockers mentioned above.

You can buy V here: