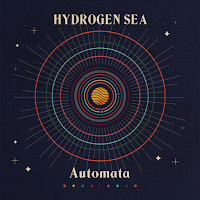 What does really happen on Automata? Well, if you asked me directly: not a lot. Hydrogen Sea releases a collection of dreamy popsongs that float on the atmosphere in my room, although a few songs are more direct and have some busy beats and/or drumming underneath the dreamy voice of singer Birsen Uçar.

To my surprise Hydrogen Sea is from Belgium. For some reason I did not see that one coming. Not that it's relevant. Automats is the duo's second album after 'In Dreams' and a departure from the past. Apparently they were fed up with creating music on the laptop and reached out to fellow musicians to make this new album. So enter Patricia Vanneste, Joris Caluwaerts en Steven van Gelder.

As far as I'm concerned it is a success, a big one even. The music still involves a lot of synths, beats, but there also are a lot of analogue elements that make it possible for Birsen Uçar to hover above the music, like a transparent ghostlike element with outerworldly qualities. Listening to her voice is being hypnotised, slowly but surely. She sings like a young girl with a tear in her eye forever. Soothing her is the only thing left as solace is unattainable. All her vocals are at a minimum double tracked, giving the ghostlike quality another boost.

The singing is an icing on the cake. Hydrogen Sea is able to make the lightest version of pop music possible, yet gives it additional layers that make the pop element totally unrecognisable for those interested in more superficial music (which is fine at times). The electronics underneath can make the song sound happy, urgent, eerie. A lot of different moods and atmospheres come by on Automata. Sometimes the melody seems to go about its very own way, almost as if separate from the vocal, to unsuspectedly underscore it only to move away again. Leaving the pop element to the vocal melody. 'The Bloop' is an example of this. Eerie, estranging, perhaps even deranged in some parts near the ending. Uçar is silent there, so who knows what has happened to her?, my mind whispers softly.

But let's return to the beautiful opening of Automata. A piano is played, with light tinkering notes that could go straight into Kairos on Concertzender. 'Pale Blue Dot' has that ethereal lightness this album has as a hallmark. Within two minutes it is all over and the band lays down a pleasant bass groove in a more up tempo pop song. Air is the mood here. The plopping bass, some of the light synth notes have that outer space vibe of e.g. 'Kelly Watch The Stars'. A violin is a surprising lead instrument. This is just one of obvious inspirations. Lana del Rey is another, but also Portishead, a band Hydrogen Sea easily surpasses. The melodic strength is so obviously better.

In 'Sinister' a guitar part coming straight out of 'Sex On Fire' is mixed with a light piano sound creating a beautiful effect. In my opinion everything comes together in the fourth song, 'Cold Water'. If you do not like this song, you are lost to Automata, without a peddle at sea. I can listen endlessly to the song that just ripples along, like many other songs do on Automata. Loving the sigh girl singing of Birsen Uçar. Automats is just as much a surprise to me like the already hinted at 'Moon Safari' and Goldfrapp's 'Gold Mountain' were years ago.