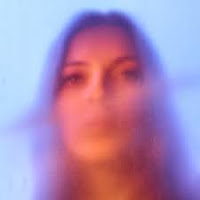 For those who think Jade Bird is an album filled with nice, soft and sweet singer-songwriter songs may come home from a cold carnival. Based on the colourful, soft-focused album art that could be the impression a guileless listener derives from it. The blurriness of the picture is the second impression and that does say something. She is in part hiding herself behind a plastic screen or something like it. Faintly disconcerting, isn't it? Not that Jade Bird is vague in her music. Far from, she can be extremely direct and loud in her songs.

Jade Bird is an British singer-songwriter who grew up mostly in Wales and studied in London. At 21 she releases her first full length album after releasing an EP called 'Something American' in 2017. Both releases were recorded at Simone Felice's studio near Woodstock, N.Y.

The illusion of a singer-songwriter can be held up in the opening song. 'Ruins' starts off with an acoustic guitar and voice. A voice with a pleasant edge. A voice from a young someone but already with some wear and tear on the vocal cords. With time Jade Bird can grow into a Beth Hart where her voice is concerned. Musically some of the songs on Jade Bird definitely could be sung by Ms. Hart as well.

Jade Bird shows a host of influences in her songs. I can hear Alanis Morissette, Sophie Hunger, to name two artists. In my opinion there's no issue here. Her songs have a, fiery, sense of own. This singer-songwriter has a message to share and is not afraid to have the drum banged for her. 'Lottery' has this Beth Hart quality and works quite well with inner dynamics, so not all is about banging this proverbial and real drum.

If anything, on Jade Bird something is going on. Things to discover, but also a sense of expectation for what comes next. Each song holds the promise of something different coming up next. 'I Get No Joy' is the loudest song Sophie Hunger has never made. The album has an alternative rock side, a more, if very direct pop element and singer-songwriter songs, where Jade Bird exposes a bit more of her softer side. It obviously is not hard for her to go full out. This quality gives the album tremendous pace and urgency, without a loss of quality of songs in the respective songs. I will not go as far to call them all outstanding, but Jade Bird obviously knows how to write a nice sounding rock song, influences and all.

Later on in the album, there are a few songs where Jade Bird really shows a more vulnerable side of herself. Songs that are piano based, leaving the bulldozering guitar blast out of the picture. These songs stand in stark contrast to the early Jake Bugg pant up rockers that come by. In a modern rockabilly style these two songs are simple blasting out of my speakers.

Summing up Jade Bird is an album where the singer of the same name is working on finding her own voice by travelling along some well-known high and byways. As a result not every thing is innovative on the album, in fact some songs are very familiar in sound. On the other hand several songs are good and some even extremely good and fully charged, making Jade Bird an album that is a very worthy full length debut.

You can buy Jade Bird here: