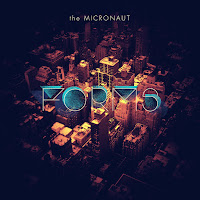 Listening to Forms for the first time I was pretty sure that this was not for me. Lots of electronics, beats, treated, unnatural vocals. No, I'm going to let this album pass me by. Or so I thought then. Somehow I came back to it as the cd was lying about the house and I shoved it into the tray of the player again.

Things started shifting from there. I noticed how positive the beats bounced. That is the best description I can present you with. Somewhere far away I am remembering 'Moon Safari', another album that is not for me of 'Felt Mountain' from what's her name? Ah, yes Goldfrapp. I had exactly the same process with these albums as I'm having with Forms.

For some reason I would have categorised The Micronaut as French. Maybe because of the faint memories of Air. The Micronaut is the artist name of Stefan Streck and he is, as the name sort of gives away, German. Forms is his third record in four years. I am not one to quote bios sent with a record, but this I would like to quote: "it's no surprise that his floating music has been described as a melting pot of sounds". It means nothing really, yet it comes very close to what I'm hearing. Cut off sounds, halted in their development into full sounds, float over broken rhythms. Although it is bloody irritating at times the effect is a bounciness and with that an extremely positive exuberance.

Over this all melodies that are not unusual in what they call pop music in 2016, are laid out, so electronic dance music of some sort. The combination of this somewhat maimed music with the exuberance of the EDM (or whatever it is called) makes the final result attractive to listen to. There are interesting things going on and often even interesting melodies are woven into the total. Nothing is what it seems.

Stefan Streck is on his own planet or five. He's making music of the future. 'Kite' is a song that comes close to the futuristic dance music, as I remember it, in one of the episodes of the original 'Star Trek' series where there's a party for the crew with dancing. 'Kite' could have been played there and fitted the future of dance in 1967 or about. As far out there music as they could imagine then. The Micronaut is presenting it for us.

I am sure that Forms will go the same way as 'Moon Safari' and 'Felt Mountain'. Both albums are gathering dust, but they were fun while they lasted. The Micronaut at present intrigues me as much as it gives me pleasure to listen to. It won't replace The Beatles nor The Stones, but then who in the end does? Forms is an album worth checking out and discover. Just listen to the mystery woven into 'Trapez' or the exotic melodies in 'Circle' and you'll know why. There is just too much going on here to ignore.

You can listen to 'Pyramid' here: